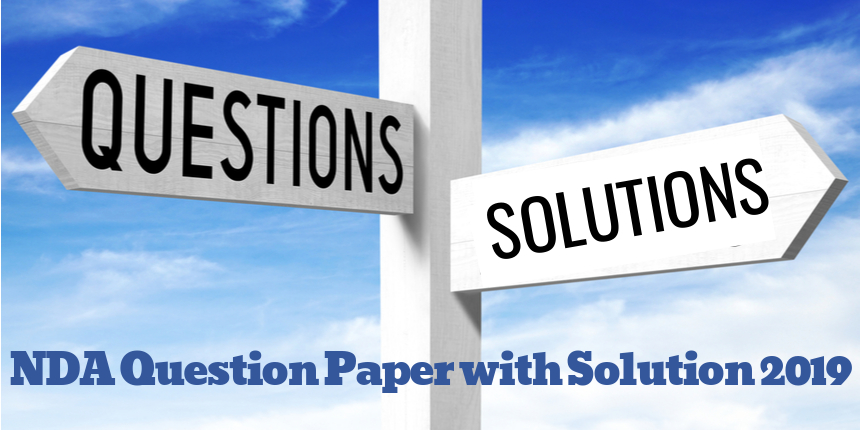 NDA Question Paper with Solution 2019 - After appearing in NDA 1 exam on April 21, many candidates become curious about SSB call, thinking who will secure the minimum cutoff marks for NDA 2019 and would be eligible for the subsequent round. Though various coaching institutes have released the unofficial NDA 1 2019 answer key, yet candidates are still looking for more reliable and authentic sources from where they can evaluate their performance and know the correct answers. Thus, to help many such confusing candidates and for the benefit of the future aspirants, Careers360 brings in NDA 2019 question paper with solution.
The solutions against the actual questions of the NDA 1 GAT paper 2019 have been prepared by the coaching and industry experts with utmost care. Though the solutions and answers have been prepared with extreme care, however, there’s 5-10% scope of discrepancy/incorrect answers or solutions. Continue reading the article further to know NDA Question Paper with solution for GAT paper.

On April 21,2019, lakhs of aspirants appeared in NDA 2019 exam. This exam had two papers, first paper was of Mathematics and the second one was of GAT (General Aptitude Test) 2019. Time limit for both the papers was 150 minutes (2 hours & 30 minutes). This exam was a screening test and those who will qualify 2019 NDA 1 offline exam will be called by Service Selection Board (SSB) for Interview and Physical Test.

Five model answers for Paper Set (D) have been given here, while for more answers with solutions of NDA 1 GAT paper 2019, you need to download the PDF by clicking on the link above.

(A) One of most widely spread

(C) is the use of tobacco

Explanation: Option A is incorrect as “the” should be used when superlative degree is used like “most” in option A.

Q. Which one of the following will NOT produce carbon dioxide on reacting with an aqueous solution of hydrochloric acid?

Explanation: When you add CaO into HCl acid , CaO reacts with H2O at first and forms Ca(OH)2:

Later the base Ca(OH)2 react with HCl and forms salt and water:

Hence our answer will be B only.

2. It describes the quantity of energy released by a single earthquake

3. Richter Scale has no upper limit

Which of the statements given above is/are correct?

Q. Which one of the following statements regarding the Rajya Sabha is NOT correct?

(C) 1/3rd of its members retire after every two years

(D) It is a permanent body, but can be dissolved earlier by the President

Explanation : Upper house of parliament which is also known as Rajya Sabha (Council of States) is a permanent body and it is not subject to dissolution. It’s one third member retire every second year, and are replaced by newly elected members. Members are elected for a term of six years. Rajya Sabha can have a maximum of 250 members. Minimum age for a person to become a member of Rajya Sabha is 30 years. This was an easy question in NDA GAT 2019 paper to grab the marks.

Q. Statement I: The Kisan manifesto adopted by the All India Kisan Sabha in August 1936 contained radical demands.

Statement II: The All India Kisan Sabha was a part of the Congress and maintained a close relationship with the Provincial Congress Committees

Explanation: All India Kisan Sabha ( also known as Akhil Bharatiya Kisan Sabha), was the name of the peasants front of the undivided Communist Party of India, an important peasant movement formed in 1936 by Sahajanand Saraswati. This was never a part of congress as in1937 elections, Kisan Sabha supported the Congress with great hope that if INC comes into power their grievances will be resolved but post election they felt betrayed when INC turned into a deaf ear.

Earlier, we have also shared answer key suggested by various other resources for both the papers for SET A, B, C and D which candidates can access by visiting this link:

Showing 2 out of 2 Questions
48 Views

what are the upcoming exam updates for 12th aspirants???

These are some of the upcoming entrance exams for which you will be eligible if you are a 12th passing candidate:

Architecture:NATA,JEE main paper 2( to get admission in top architectural institutes)

The NDA exam is an entrance exam to join any wing of defense. The exam is out of 900 marks. There are two sections divided into Mathematics and General Ability Test. 120 questions from Maths and 150 from the General Abilities part. You are given 2 hours and 30 minutes to complete each section. They are MCQ-type questions. 2.5 marks for every correct answer and -0.83 for every wrong answer is the marking scheme.

View All Questions
Have a question related to Paper 1 ?