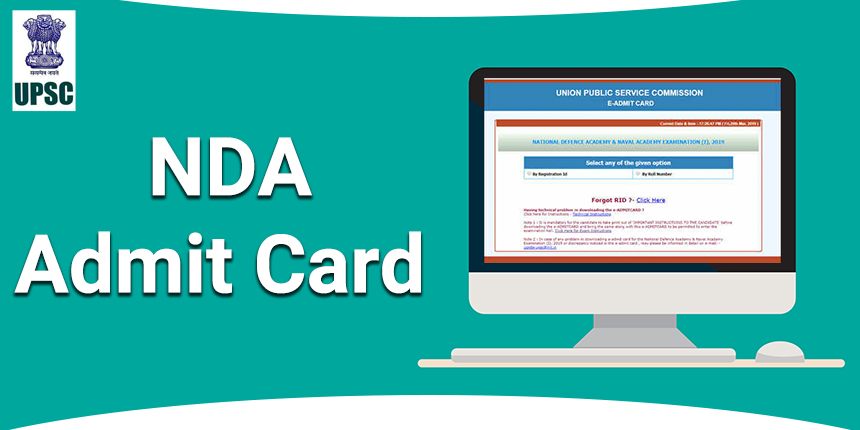 Step 2: Click on ‘e-admit cards for various examinations of UPSC.

Step 7: Use the download link to avail the admit card of NDA that will be displayed on the screen

Image of login window to download NDA 2020 admit card is given below:

After downloading NDA 2020 admit card candidates will find the following details mentioned in it.

Sample of NDA Admit Card is as follows 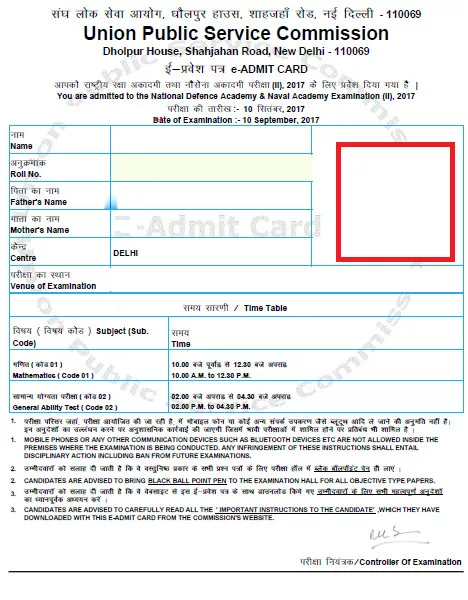 Documents to Carry Along with NDA 2020 Admit Card

On the day of exam, candidates need to carry any one of the given photo-identity proof (valid and original) along with the admit card of NDA 2020 to the exam hall. In addition, they must carry two passport size photographs (same as the one uploaded in the NDA application form) to the exam hall.

Browsers to use to download of NDA Admit Card 2020

Candidates are advised to use the latest versions of the following browsers to download their admit card of NDA 2020.

In case of any problem faced at the time of downloading admit card candidates can check whether the technical instructions given by UPSC are being followed or not. If yes, candidates must contact the Commission immediately without delay.

Candidates can contact the NDA Facilitation Counter located in the Commission’s Office either in person or call on 011–23385271/ 23381125/ 23098543 with Extn 4119, 4120 in this regard. Candidates who fail to notify the Commission’s Office regarding non-receipt of his/her NDA admit card 2020 will not be able to obtain it and cannot appear for the exam without the same.

How to download the admit card of NDA 2020 in case it is blocked by UPSC server?

If any candidate receives the NDA 2020 admit card of some other candidate due to some processing error, they should notify this fact to the Commission and request it to re-issue the correct admit card. This is vital as candidates cannot appear for the exam with a wrong admit card of NDA 2020.

How to Correct Discrepancies in NDA Admit Card 2020?

After downloading the admit card of NDA 2020, candidates may scan the same for any discrepancies. In case they find their signature or photograph blurred or even some mistakes in their details, they must immediately contact the conducting body to correct the same. Candidates can email and send a copy of their NDA admit card along with application form or can even go in person to the facilitation centre or call up at the given numbers.

Details to be Mentioned while Emailing the Contracting Authorities

The authorities have provided 41 cities across the country as exam centres. Candidates need to choose three exam centres while filling the NDA application form 2020. The exam centre is allotted on a first come first serve basis. There is a certain ceiling on the number of candidates from a city except for Chennai, Dispur, Kolkata and Nagpur. Other cities have a cap and candidates may be allotted their second preference if the first one is filled up and so on. The exact address of the exam centre will be mentioned on the NDA 2020 admit card. The list of NDA exam cities are as follows

Items Allowed inside the Exam Hall

Candidates will be allowed to carry their NDA 2020 admit card, a valid photo Id and the following items:

Candidates who appear for the NDA exam will have to wait till the NDA result 2020 is announced. UPSC will prepare a merit list of candidates who have obtained the minimum qualifying marks in the written examination as determined by the Commission. Qualified candidates will have to appear for an Intelligence and Personality Test before a Services Selection Board where they will be assessed on Officer’s potentiality. Candidates for the Air Force will have to qualify the Computerised Pilot Selection System (CPSS) in addition.

UPSC will release the answer key of NDA 1 2020 after all the stages of the NDA 2020 exam are concluded. But right after the written exam is over candidates can check the NDA 2020 answer key released by major coaching institutes. The answer key by these coaching institutes will be published separately for both the papers - Mathematics and General Ability Test (GAT) it will include the question IDs of all the sets and their correct answer. NDA answer key 2020 will help candidates to calculate their expected score by counting the number of correct and incorrect answers.

Question: What if I cannot download NDA 2020 admit card?

Candidates may first clear the cache of the browser. They must then retry to download the admit card of NDA 2020. If they still cannot download it, they must contact the authorities before April 10.

Question: What should I do if my photograph is unclear in the NDA admit card?

Please contact the NDA helpline to rectify the same. This should be mandatory as students will not be allowed in without the admit card. It is mandatory to bring the a valid photo ID in original.

Question: What if I receive a wrong NDA 2020 admit card?

Question: Are any specifications mentioned for the printout of the admit card of NDA 2020?

While the authorities have not specified any, it is advisable to carry a colour printout of the admit card to the exam hall.

Question: Is it necessary to safe keep the NDA admit card 2020?

If the admit card is lost before the exam is held, candidates can still download it. However, it will cannot be availed after the exam is conducted. Therefore, it is advisable to keep a soft copy of the same saved so that it can be retrieved in case it is lost.

Question: Can a candidate appear at a Centre/Venue other than the Venue mentioned his/her e-Admit Card?

No candidate will be allowed to appear at a centre/venue other than the one mentioned in the NDA  admit card 2020. If any candidate appears in any other centre, his/her candidature will not be evaluated and will be liable for cancellation.

Question: What is the suitable version for downloading NDA admit card 2020?

It is advisable to use latest version of Google Chrome and Mozilla Firefox browsers to download NDA admit card.

Question: What should I do if I have not received my admit card?

Candidates who has not received the NDA admit card 2020 are advised to contact UPSC office a week before the examination.

Question: How can I retrieve my registration Id?

Go to the login page and click on the link to retrieve registration id. Enter all detailed in required fields, your registration Id will be provided to you.

Question: How to correct discrepancies in NDA admit card 2020?

Candidates finding any mistakes in NDA 2020 admit card are advised to contact UPSC before one week of examination.

Question: When can I check my NDA result?

UPSC NDA result 2020 will be declared tentatively on April 19, 2020. Candidates can check the results from the official website.

As a 11th standard student you are not eligible for NDA exam as the candidate must have passed or must be appearing for the 12th standard exams from any recognized board. It is important as you will be required to produce the proof for passing the 10+2 in the month of December 2020.

You can check the eligibility criteria on the link given below:

Hii,I am a student of standard 11. Please,give me complete information about NDA exam. How to registered? How many phase of exam? Exam date ,etc. Also give me Syllabus

Hello
NDA Exam is conducted by UPSC for selecting candidates for indian army, Navy and AirForce. You can only apply after 12th, if you are from commerce background then you can only apply for indian army, if you are from science background in 10+2 then you can apply for all three, yearly exam is conducted twice. You can register at website of upsc official site. 3phases are there , first is written test after you qualify that you will be called for ssb interview after you qualify that you will have to undergo medicals, once you clear all three a merit list is prepared and you will be called for joining the academy. Exam dates will be given in notification. Syllabus is maths, English and general awarness. For detailed you can have in notification, usually it is of 10+2 level.
Read More
Answer
Answer Later
Report
6 Views

Dear Student!
NDA has not given syllabus norms as such for Current Affairs. Current affairs itself means the recent happenings going around in the world. So, as a matter of fact, tou can prepare for topics such as important dates, important and current happening in India and around the world, prominent personalities, geography, history, and basic science as a whole, and basic knowledge about Indian armed forces. Hope this helps.
Good luck!
Read More
Answer
Answer Later
Report
12 Views

i have hypermetropia with a corrected vision using 3.5D corrective glasses(cylindrical or spherical matters?). am I eligible for SSB medical test for vision?

Here is the full details for health conditions:

hello, I am 12th PCB student can i go in defence without give nda. please tell me about any exam in officer ranking

If you want to go into defence services as an officer just after class 12th then the only option is to appear for National defence academy exam and qualify the SSB interviewthe qualification is you need to have physics as your subject in class 12th and mathematics if you are applying for airforce and navy.

Other option is technical entry scheme in which you need to have physics chemistry and mathematics for subject in class 12th.

if you wish to join defence forces as an officer after your graduation then there are multiple entry option technical entry , general entry by cdse.