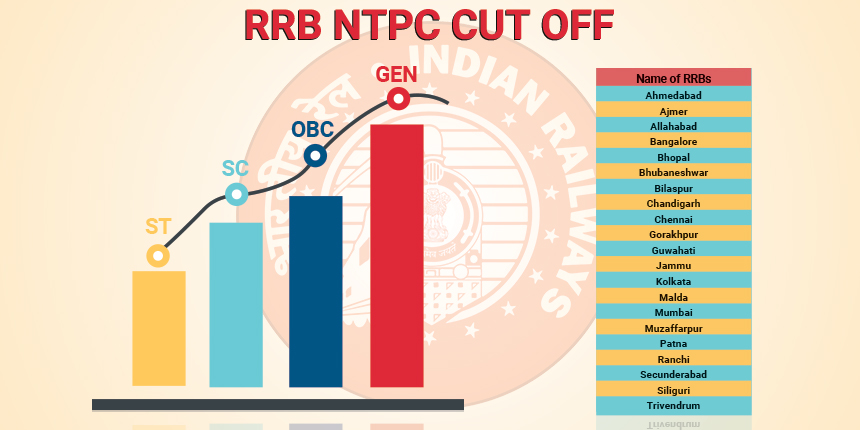 RRB NTPC cutoff 2020 is the minimum qualifying marks that candidates need to secure to qualify the RRB NTPC exam and become eligible for the next round of the RRB NTPC selection process. RRB uses the normalisation process to calculate cut off marks as the exam is conducted in multiple shifts and days.

To check the cutoff of RRB NTPC 2020, candidates are advised to follow the steps mentioned here:

The minimum qualifying marks for RRB NTPC for CBT 1 and 2 according to different categories are mentioned in the table below:

Candidates can check below the expected cut off for this stage:

RRB NTPC 2020 Cutoff will be released for the following stages:

RRB will release the cutoff for CBT 1 on the basis of the marks scored by candidates in General Awareness, Mathematics and General Intelligence and Reasoning. RRB NTPC cut off for CBT 1 will be calculated out of 100 marks. Based on the cut off marks of RRB NTPC for CBT 1 candidates will be shortlisted 20 times the number of vacancies for the CBT 2.

RRB will calculate the RRB NTPC cut off for CBT 2 out of 120 marks. Candidates who score the RRB NTPC Cutoff 2020 in CBT 2 will be shortlisted for Typing Skill Test/Computer-based Aptitude Test (CBAT), document verification (DV).

The CBAT stage is conducted for the post of Station Master (SM)/Traffic Assistant (TA) in the Indian Railways. Candidates selection for this stage will be based on their performance in CBT 2. For CBAT, e-aspirants, 8 times the number of total vacancies will be selected. The qualifying marks prescribed for CBAT is 42 which candidates need to secure during each test battery. To shortlist candidates for DV, RRB will fix the RRB NTPC cut off marks for CBAT.

What is the normalisation process of RRB NTPC 2020 Cutoff?

RRBs will conduct RRB NTPC exam in multiple shifts, stages and sessions. The difficulty level of the question paper in each shift can be different. The Railway Boards utilise the normalisation process to equate marks of candidates across various shifts. RRB NTPC cut off 2019-20 for each stage will be prepared after the marks of candidates have been normalised.

In the following table, we have shared the previous year cut off marks of 2018 CBT - 1. Candidates can refer to the cut off marks here.

How to Prepare for RRB NTPC

Question: Is there a sectional cut off in the RRB NTPC exam?

No, there are no sectional cut off marks in RRB NTPC.

Question: Do I need to secure cut off marks for RRB NTPC?

Yes, candidates are required to score the minimum cut off marks to qualify RRB NTPC.

Question: Is RRB NTPC cut off 2020 different for different zones?

Yes, the cut off will be different for all the RRBs.

Question: How is the qualifying cut off different from the overall cut off?

The qualifying cut off is only to qualify the exam. It does not guarantee candidates selection for the subsequent round. Candidates final selection is based on the overall cut off only.

Question: Is RRB NTPC cut off for SC/ST candidates different for General Category?

Yes, it is different and not just for SC/ST but for other categories as well.

Question: From where can I find the cut off marks?

The cut off marks of RRB NTPC is mentioned in the scorecard which will be released after the declaration of the RRB NTPC result 2020.

How to prepare GK for RRB NTPC

How to Prepare for RRB NTPC 2020 - Candidates preparing for RR...

How I want To practice online mock test for RRB NTPC and RRB group- D?

There are websites that offer free mock tests for RRB exam, so you can try that, you can also give mock in offline mode by setting a timer and solving questions from practice book or there are many competitive exam sites which has mock paper for different sections such as quantitative aptitude, english, reasoning so you can practice these questions as well.
Read More
Answer

hi sir.I applied for rrb ntpc 2019.In notification it was mentioned that obc certificate must not be older than one year at time of DV.if i get obc certificate beyond the crucial date,Is this certificate valid at the time of document verification??

how I get previous year question paper of RRB NTPC to check also rapidjobresult.in

You can find the previous year papers and sample papers of RRB NTPC from the below links:

The following are the details of the Railway Group D exam: