What is SSC MTS Full Form? Every year lakhs of candidates apply for this post and this is the most frequently asked question. The full form of SSC MTS is the Staff Selection Commission exam for Multi-Tasking Staff. As this is clear by the SSC MTS full form, the exam is conducted by the Staff Selection Commission (SSC) on the national level. SSC MTS exam is conducted to recruit the personnel for the Group D job profile under the Central Government of India. Aspirants can apply for SSC MTS exam on the official website of SSC - ssc.nic.in. Along with the full form of SSC MTS, it is important to understand different posts under SSC MTS, job responsibility, and other important aspects regarding SSC MTS full form. To know more, read the full article below. 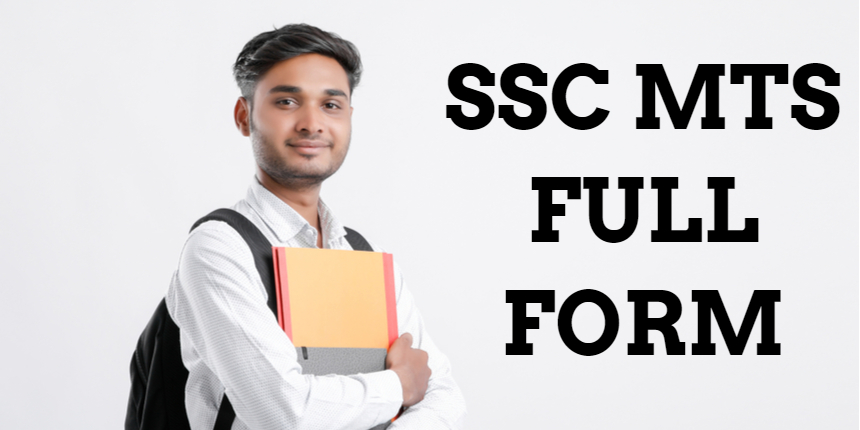 What is SSC MTS Full Form?

As we know by now, the full form of SSC MTS is the Staff Selection Commission exam for Multi-Tasking Staff. It is important to know that along with SSC MTS, SSC also conducts recruitment exams for other posts such as SSC CGL, SSC GD Constable, and SSC JE. The eligibility criteria varies as per the post you will apply for. SSC MTS exam is conducted as per the vacancies available in the various departments under the Central Government of India.

As we understand by the full form of SSC MTS that the exam is conducted to recruit the personnel for multi-tasking in non-technical posts, let’s discuss the job profiles on which shortlisted candidates will be recruited. Check below the table to know about the SSC MTS job profiles.

As of now, we covered details regarding the SSC MTS full form and job responsibility. Students can check the list of departments under which personnels got recruited.

Question: What is the full form of SSC MTS?

The SSC MTS full form is the SSC Multi-Tasking Staff.

Question: Who can apply for the SSC MTS exam?

Candidates who meet the minimum eligibility criteria can apply for the SSC MTS exam.

Question: What is the salary of SSC MTS?

Question: Is SSC MTS after 12th?

1 day ago
Read More
View All News and Articles

hello, I uploaded my photo with spectacles for ssc mts.. will ssc reject my application ? please anyone answer it..Im tensed about this

hope you are doing well and safe. With reference to your query,  I would glad inform you that their is no need to worry in your case , SSC only need photgraph for authenication of the candidate . If they have any eye crieria ,they will take eye test for sure no matters whether you wear spectacles in the photo or not . However ,it is a good formal way to click photograph without spectacles  but still no need to worry

Hope you found this answer informative. Best wishes for your future

In ssc mts form my signature is visible in preview mode.but when I got printed my application form after final submission my signature become too small. please tell me my admit card will be issued or cancelled.

You don't have to worry as you admit card will surely be issued. What happens is that the signature that image that is uploaded while filling the application for has very less unit of data and memory measurement and hence when we take print of it then it automatically becomes very small. If there was any issue with your signature then it would have never been uploaded and further if there will be any discrepancy in the image then you will get mail and option to reupload.

what is the detail ssc mts math syllabus 2021?

The Staff Selection Commission (SSC) has prescribes the SSC MTS 2021 syllabus and mentioned it in the official notification. It has four sections namely:

By math syllabus, I'm assuming, you want detailed syllabi of Numerical Aptitude Section. It consists of the following topics:

To know more about the detailed syllabi of other sections as well as the weightage of each section click on the following link.

Hope this was insightful.

I have applied for ews roght now ... then can u tell me which financial year it should be given ??? and also tell me is it valuable for ssc mts 2021 ... because at the tym of form filling i have given ews category!!

You need to apply for EWS certificate with financial year 2020-21. if you fail to submit the certificate, you will be refrained from any befits of reserved criteria. Also, you need to apply in the proper format as mentioned by the SSC MTS authority, the format is given in the pdf link below:

Sir I filled the SSC MTS form last time and in filling the form in "State of bord /university" and "Name of the board" I filled "Uttar Pradesh" and "Other" because CBSE was not in the option.But today I am filling SSC GD form I saw "Delhi" and "CBSE" there so it is wrong or right please tell me.

It is totally right. SSC GD and SSC MTS are two different examinations and conducted separately. They both have different criteria and process, so while filling SSC MTS application when you did not see CBSE board and Delhi that is because there was no requirement of it but in GD there is requirement to get full details of the candidate's exact mode of passing 12th so they have asked it and you have to fill it accordingly.So, you can select CBSE and Delhi.