The exam authorities have released the RRB NTPC CBT 2022 city and date intimation slip for pay levels 2, 3 and 5 on June 6 on the concerned regional official websites except for the Guwahati region. The board has postponed for RRB NTPC CBT 2 exam 2022 for the Guwahati region due to landslides and floods over the Lumding at Badarpur Hill section of N. F. Railway. For other RRB's, the RRB CBT 2 2022 exam will be held as per the schedule.

Earlier, the exam authorities released the RRB NTPC CBT 2022 city and date intimation slip for pay levels 2, 3 and 5 on May 31 to the concerned regional official for eight RRBs only including Bhubaneswar, Bilaspur, Gorakhpur, Mumbai, Muzaffarpur, Chandigarh, Ranchi and Secunderabad.

RRB NTPC CBT 2 city and date Intimation slip 2022 for other RRB's has been released in their respective regional websites. RRB has released the RRB NTPC 2022 admit card for pay levels 2, 3 & 5 in online mode on the regional websites. The exam authorities has released the RRB NTPC 2022 CBT 2 exam dates for pay level 5, 3 and 2 in online on May 27 on the official website.

Railway Recruitment Board has concluded the RRB NTPC CBT 2 exam for levels 4 and 6 on May 9 & 10 in two shifts. Candidates who appeared in the exam can get the RRB NTPC CBT 2 exam analysis and memory based questions for all shifts. The authorities released RRB NTPC admit card for CBT 2 (CEN 01/2019) on May 5, on the respective regional official websites.

Earlier, RRB released the revised RRB NTPC CBT 1 result 2022 online on March 30. Candidates can download scorecards on the respective RRB regional websites. RRB NTPC 2022 result for the CBT 1 exam is through login by entering registration number and date of birth.

Shortlisted candidates are advised to check RRB NTPC syllabus of CBT 2 and previous years question papers of RRB NTPC exam for better preparation. The RRB NTPC exam is held for the recruitment of both undergraduate and graduate-level posts for 21 regional zones across the nation.

What is the RRB NTPC exam?

The RRB NTPC examination is conducted on the national level by the Railway Recruitment Board to recruit the personnel for graduate and undergraduate posts under Non-Technical Popular Categories (NTPC) in various zonal railways and production units of Indian Railways. To qualify the RRB NTPC exam, candidates need to appear in different stages of RRB NTPC recruitment process. The different stages of RRB NTPC recruitment process are - CBT 1, CBT 2, Typing(Skill Test), Document verification and medical examination. The RRB NTPC exam has been conducted for various NTPC posts. To know all about the RRB NTPC posts, check the table below.
RRB NTPC Posts

The RRB NTPC exam is conducted to recruit suitable candidates for NTPC posts. The age limit for candidates who will apply to undergraduate level NTPC posts is 18 years to 30 years with the educational qualification of Class 12th whereas for graduate-level posts of RRB NTPC, a graduate with the age limit of 18 years to 33 years can apply. Candidates who have applied for the RRB NTPC exam can check all the details on the official website as well as on the regional websites. Check the direct links for RRB NTPC regional websites in the table below.

What is the Full Form of RRB NTPC?

RRB has announced the 35, 208 vacancies for various u undergraduate and graduate level posts of RRB NTPC. Candidates need to provide the documents to prove their eligibility for the RRB NTPC posts they have applied for. To know more about RRB NTPC vacancies, check the table below. 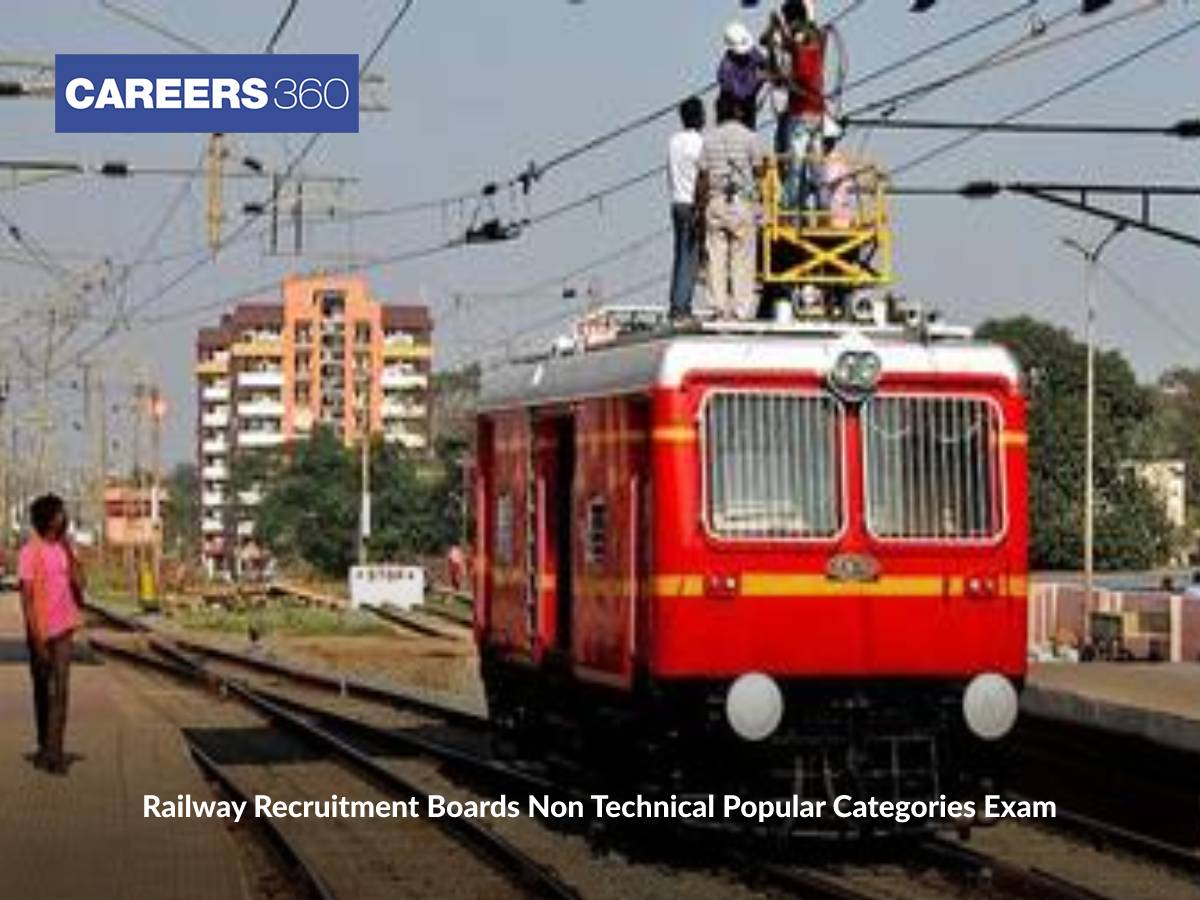 NOTE: Age relaxation for categories is provided to candidates belonging to reserved categories

Relaxation in the age limit

Aspirants can go through the post-wise educational qualification of RRB NTPC.

Mode of Application : Online and Offline

Candidates need to enter the personal details, academic details, contact details along with the scanned photograph and signature to complete the application process of RRB NTPC. The application fee of RRB NTPC exam varies as per the category Candidates are able to pay the fee both online and offline.

How to apply online for RRB NTPC?

Candidates belonging to SC/ST categories had to upload scanned copies of SC/ST certificates for availing of the benefits of free travel.

RRB NTPC Exam - How to make corrections in application form

The first stage as per the RRB NTPC exam pattern will be conducted in computer-based mode. The maximum marks allotted for this test is 100. Questions are asked from General Awareness, Arithmetic Ability, General Intelligence, and Reasoning.

The test will be conducted in Computer Based Mode.

Candidates will have to qualify in test batteries.

Candidates have to bring one color passport-sized photograph. Students appearing in the RRB NTPC exam need to write a self-declaration in front of the invigilator at the RRB NTPC examination hall and affix their photograph and Left Thumb Impression (LTI). RRB NTPC admit card of SC/ST candidates will contain the details of their free travel authority. They can book tickets after submission of a self-attested copy of the admit card and SC/ST certificate.

There are two copies of the RRB NTPC admit card. One is the candidate's copy and another one is the RRB copy. Check the details mentioned in both the copies of admit card.

RRB NTPC examination: Documents to be carried along with the admit card

How to download the admit card in case of RRB NTPC registration number is available?

Only those candidates will be selected for the next stage of the selection process who will score qualifying marks as per their category. Normalization of marks will be done in the first and second stages. RRB NTPC result will be declared based on the normalized marks. The scorecard of candidates will be released a few days after the declaration of the result.

RRB NTPC examination: How to check the result?

The followings are the steps to be followed by the candidates to download the scorecard of the RRB NTPC examination,

Details mentioned in the scorecard of RRB NTPC exam

The scorecard of RRB NTPC displays the following details.

In order to get qualified in RRB NTPC exam, candidates need to secure minimum qualifying marks.

Candidates can check the number of students qualified after the declaration of final result of RRB NTPC exam 2017 for different zones of RRB NTPC.

The exam authorities has released the RRB NTPC 2022 cut off for CBT 2 (pay level 2 & 5) online on July 18 on the respective official regional websites. The cutoff of RRB NTPC is the minimum qualifying marks that candidates have to score to qualify for the exam.

Question:When will the RRB NTPC admit card be released for CBT 2?

The admit card of RRB NTPC CBT 2 for pay level 2, 3 and 5 has been released online in June 8 on the respective regional official websites.

Question:How to download the admit card of RRB NTPC?

Question:What if there are errors in my RRB NTPC admit card?

If there are any discrepancies in the admit card, candidates must contact the exam authorities to get it rectified as soon as possible.

Question:What is the conducting mode of RRB NTPC?

Question:What is the minimum age required for applying for the RRB NTPC?

The minimum age required for applying for the RRB NTPC is 18 years.

Question:How many stages does RRB NTPC exam have?

Question:Is there a sectional cut off in RRB NTPC exam?

No, there are no sectional cut off marks in RRB NTPC.

Question:Is RRB NTPC cut off different for all zones?

Yes, the cut off is different for all RRBs.

Question:Does RRB release the answer key for the RRB NTPC CBT 1 and 2 exam?

Yes, candidates can challenge the RRB NTPC answer key through the official website.

No, it is not tough. But if you haven't prepared well enough, not just RRB NTPC but any exam will be difficult to crack. It is advised to prepare for at least 3-4 hours per day and solve RRB mock tests as well as previous year question papers.

Question:What is the selection process of RRB NTPC?

The Station Master job is one of the most popular and best jobs, along with the traffic apprentice, goods guard, and commercial apprentice.

I am a general caste studen. i applied for rrb ntpc and cleared the tier-1. Now i got to know that I wrongly select my caste as obc. so what to do now?

Your candidature is more likely to get cancelled. They will ask for an OBC certificate failing to submit it will eventually cancel your candidature for this exam. Moreover, the cut off for different categories is different and as your entered OBC as your category, you cleared the exam and the cut off for the general category must have been higher than that. It is also not fair to other students as well. These railway and other government exams are very strict in their conduct and will not accept any discrepancy or error. The RRB NTPC exam is administered on the national level by the Railway Recruitment Board to provide jobs as personnel for graduate and undergraduate posts under Non-Technical Popular Categories (NTPC) in several zonal railways and production units of Indian Railways. To pass the RRB NTPC exam, aspirants need to go through different stages of the RRB NTPC recruitment process. The various phases of the RRB NTPC recruitment process are - CBT 1, CBT 2, Typing(Skill Test), Document verification and medical examination. The RRB NTPC exam has been administered for several NTPC posts.

RRB NTPC Posts are as follows

I am having printout of e-aadhar and original voter id... will they accept for rrb ntpc exam ?

sir i have no roll number of NTPC

The next page will be open

The RRB will ask you for some details

Enter your name, father’s name and date of birth

RRBs sent an OTP at the registered mobile number

Enter the OTP at the appropriate place

The Registration ID is sent to your registered e-mail ID.

Hope you found it helpful.

Hope you are doing great ! No . You will not face any problem if you had compartment in your class 12th but yes at least you should have a aggregate percentage of 50percent in your +2 to get eligible for rrb ntpc ,keep this thing in mind as well ,but yes due to compartment ,no problem will be there at all

Sir According to RRB NTPC notification 2019 EWS Certificate must be Prior to Application. But someone told me on an RTI reply RRB also validate new EWS. is it correct...?

How to prepare reasoning for RRB NTPC 2019 - Preparation Tips & Strategy

How to prepare GK for RRB NTPC 2019 - Subject Wise Preparation

CDS Full Form - What is the Full form of CDS Exam?