What is the full form of IBPS? This question comes from lots of aspirants. The full form of IBPS is Institute of Banking Personnel Selection. IBPS conducts the banking recruitment exams for the post of IBPS PO, IBPS Clerk, IBPS SO, IBPS RRB (Officer Scale I, II, III and Office Assistants). IBPS has registered itself in 1860 and 1950 under the Societies Registration Act and Bombay Public Trust as an autonomous body with the main aim to evolve and implement a world class system of selection of personnel for their client organization. The IBPS recruitment exam is conducted once every year for all the posts separately. 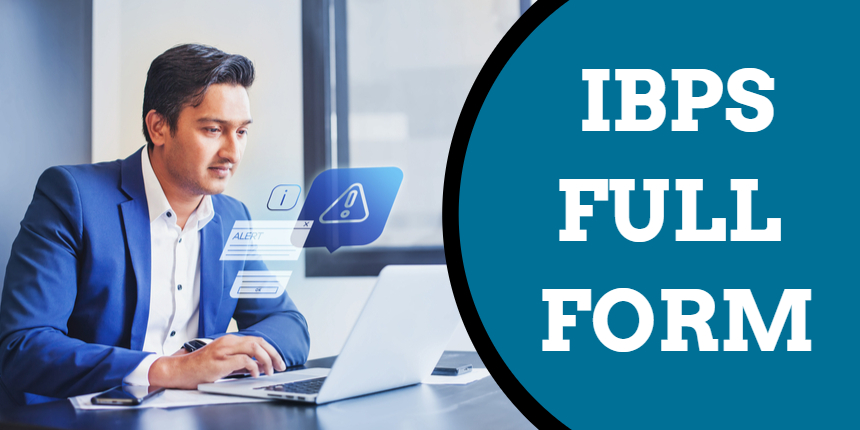 Earlier in 1975, the National Institute of Bank Management (NIBM) formed a small unit, Personnel Selection Services (PSS) to recruit the staff at the different branches of Indian banks. This organization was formed when banks in India were nationalized in 1969. Later in 1984, PSS was converted into the Institute of Banking Personnel Selection (IBPS). The IBPS conducts the recruitment exams in three phases - prelims, mains and interview. However, there is no interview round for the candidates getting selected for clerical posts.

What is IBPS full form?

As we know that the full form of IBPS is Institute of Banking Personnel Selection, there are some other important abbreviations of different posts that students need to know. Check below the table to know more about the IBPS full form.

As we understand by the IBPS full form, IBPS is an organization for personnel selection. There are a total number of 11 banks who participate in IBPS recruitment exams. IBPS helps these banks in the fair selection of candidates for the different posts such as PO, clerks and others. While completing the application procedure of IBPS, candidates can choose these banks as per their preference. Check below the list of participant banks of IBPS

Candidates willing to appear in the recruitment exams conducted by IBPS need to apply online on the official website of IBPS - ibps.in. The application form of IBPS will be available in online mode only. As per the selection process of IBPS, the recruitment exam will be conducted in three different phases- prelims, main and interview. For the clerical post, there will be no interview round. However, candidates need to appear for a language proficiency test if needed. It is mandatory to meet cut off marks provided by the IBPS at each stage for the final allotment.

The salary of IBPS will vary according to the posts in the bank. Along with the IBPS salary, employees will also get different allowances such as Dearness allowance, house rent allowance, special allowances and many others. The timely increments and reimbursements are also one of the perks under IBPS Salary.

For promotion in banks, candidates need to appear for either departmental exams or JAIIB exams. The promotion of the candidates will be based on the merit list which will be released category-wise.

Question: What is the full form of the IBPS exam?

The IBPS full form is Institute of Banking Personnel Selection.

Question: How many banks participate in IBPS recruitment procedure?

For the IBPS recruitment procedure, a total number of 11 banks participate. Earlier, there were 17.

Question: Which one is easier : IBPS or SBI?

Both the IBPS and SBI have their own difficulty level. However, candidates can crack with a good preparation level.

Question: Who can apply for IBPS bank exams?

For IBPS bank exams, the minimum qualification is graduation with any stream.

Know IBPS PO Full Form and all other details related to the IB...

Firstly, let me tell you that the upper age limit for applying for IBPS post is 28 years. Secondly, In this year you might had been of 29 years, which makes you ineligible for the same.  But there are some relaxation for few of the categories, like :

If you belongs from either of these, then you can apply for relaxation.

Hope this answer will help you.

What is the difference between SBI po and Ibps po

Hi,
SBI PO exam is only for SBI and its associate banks whereas IBPS PO exam is for rest of the public sector banks.
SBI PO has a higher salary + many more incentives. Work pressure is more in SBI. Opportunities for growth are more in SBI.
SBI is better leaving its work pressure aside.
Hope it helps...
Read More
Answer

Institute of Personnel Banking Selection (IBPS) will release the IBPS PO 2021 application form in online mode on the official website ibps.in in the first week of September. The officials have not yet declared the dates for the release of the application form. Keep an eye on the official website for the latest information. The application  form fees can be payed through debit/credit card, net banking, IMPS, cash card and mobile wallets in online mode to make payments.

Yes, final-year students are eligible to take the IBPS PO exam, but their graduation degree must be completed by August 2022.

Candidates having a Graduation Degree or a Degree equivalent to a Graduation Degree from a university recognised by the Indian State/Central Government. The degree must be earned before August 2022, or before the deadline for submitting the Application Form.

The best way to cover current affairs is to read newspaper on a daily basis, you can refer The Hindu or The Indian Express  along with this, refer any business newspaper, since banking exam focuses more on business, finance, economy etc, watch business news channel to keep yourself updated, you can also refer monthly magazines like pratiyogita darpan in case you are unable to read newspaper regularly but newspaper reading is always the best option, you can focus on last three to four months current affairs regarding this.
Read More
Answer

Know all about IBPS PO syllabus and exam pattern