SSC CHSL Salary 2020: Candidates recruited through Staff Selection Commission - Combined Higher Secondary Level Exam are provided with one of the best compensations in terms of SSC CHSL 2020 salary. Since the exam is around the corner, an aspirant must be interested in knowing the SSC CHSL salary 2020 to check how much they will be paid after their selection. The salary of SSC CHSL 2020 comprises various components like the basic salary, allowances and compensations associated with the post making their life financially stable and secure. The allowances employees receive as SSC CHSL 2020 salary are dearness allowance, house rent allowance, medical allowance, etc. The Commission mentions the SSC CHSL pay scale 2020 in the detailed notification released for the recruitment. 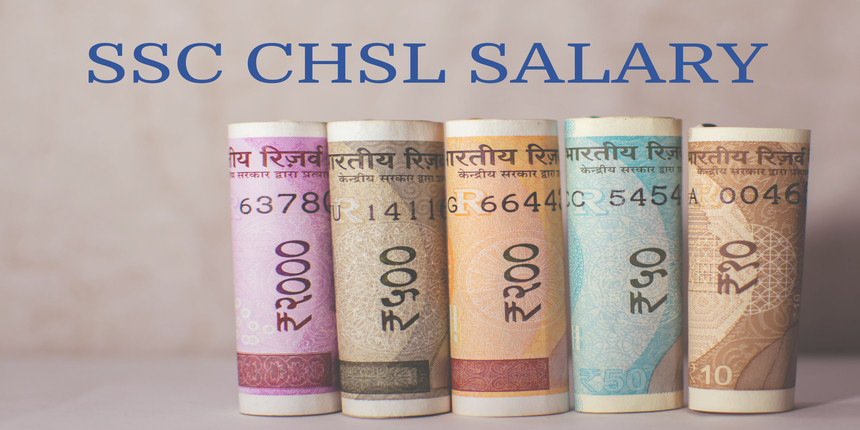 SSC CHSL 2020 is conducted to recruit candidates to the post of Lower Divisional Clerk/Junior Secretariat Assistant, Postal Assistant/Sorting Assistant and Data Entry Operators for various Ministries/Departments/Offices of the Government of India. A candidate qualifying 12th standard from a recognised board between the age of 18 - 27 years is eligible to apply for SSC CHSL exam. It is a three stage exam consisting of tier 1, 2 and 3.

SSC CHSL Salary 2020 as per category of cities

SSC CHSL salary structure and other benefits differ as per the place one is posted. According to 7th Pay Commission, the cities are divided into three categories, X, Y and Z. House rent allowances and a few other benefits decrease from X to Z. Candidates can take note of the X, Y and Z cities.

Z City: All other cities

An aspirant of SSC CHSL 2020 must also know the job responsibilities entrusted along with the post. SSC CHSL, conducted to recruit candidates to the post of Lower Divisional Clerk/ Junior Secretariat Assistant, Postal Assistant/ Sorting Assistant and Data Entry Operators for various Ministries/ Departments/ Offices of the Government of India comes with defined career growth opportunities. Promotions to the next level are received after a definite term or by taking departmental exams conducted for it.

However, it requires mention that the life of SSC CHSL recruits is not only financially secure with the salary of SSC CHSL 2020 but also comes with varied perquisites:

Question: What is the in-hand salary of SSC CHSL recruited candidates?

The in-hand salary of SSC CHSL recruited candidates differ as per the post and the place of posting. The salary ranges from Rs. 18777 to Rs. 31045.

Question: Can I apply for X cities so that I receive the maximum benefits?

No, you will be allotted a city after the whole process of recruitment ends at the conducting body’s discretion.

Question: Is negative mark cut for the wrong answers marked in SSC CHSL?

One-fourth mark is deducted for every wrong answer marked.

Question: What are the stages of SSC CHSL exam?

No, you will not be eligible for SSC CHSL. Based on the SSC CHSL eligibility criteria 2020, only those candidates between 18-27 years of age are eligible.

SSC CHSL Eligibility Criteria 2020 - All the details about SSC...

Hello sir I have applied for ssc chsl 2020....while filling up the form i entered for ews category but up to the crucial thet i did not have ews certoificate Now i have ews certificate..Now sir if i pass the exam during document verification will there be any problem..I will be selected or not sir

can a student with commerce without maths can apply for ssc CHSL exam ?

The minimum criteria to be eligible for SSC CHSL Exam is that the candidate must have passed 10+2 or an equivalent examination from a recognized university board. But for, DEO in Comptroller and Auditor General of India (C&AG) post, one should have passed 12th in Science Stream along with Mathematics. For LDC/JSA, PA/SA, and DEO, mathematics is not compulsory.
Read More
Answer

sir which book is best to crack SSC chsl exam

Plinth to Paramount by Neetu Singh


For detailed information go through