Best Books to Prepare for NDA - The Union Public Service Commission (UPSC) conducts the National Defense Academy (NDA) exam twice a year. The NDA exam is one of the most popular exams in India especially for students who are in 10+2. As per various data, close to 4-5 lac candidates apply for NDA and only 5000-6000 candidates get selected for the final stage that is Services Selection Board (SSB) interview. 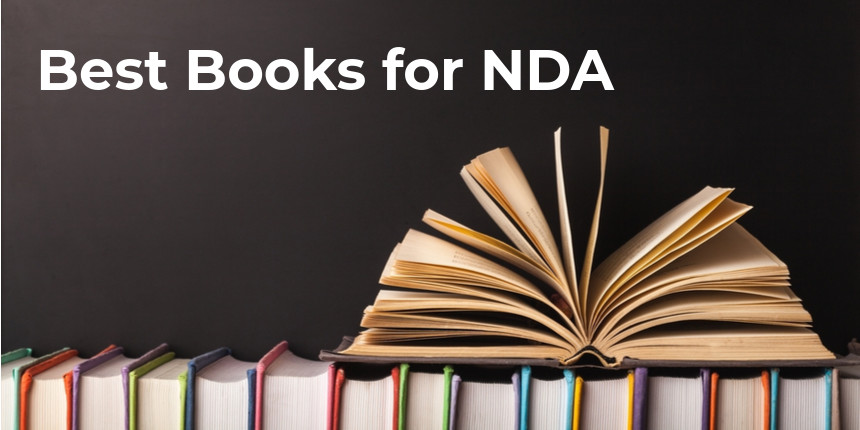 From the following lists, NDA 2022 aspirants can find the best books for overall preparation as well as for the subject General Ability Test.

From the following table, candidates can refer to the books of NDA for Mathematics subject.

For questions from the chemistry section of the NDA exam, the NCERT Chemistry book of Class 11 and 12 along with the NCERT Exemplar is enough The difficulty level will also be 10+2. The topics in Chemistry of NDA will be as follows -

In this section, NDA tests the candidate’s abilities in understanding grammar and vocabulary. Here are the books that the students can refer to for English subject.

The exam conducting authority prescribes the NDA 2022 syllabus and mentions it as the official notification. Candidates preparing for NDA must check the syllabus to plan their studies like-wise. The syllabus of NDA 2022 comprises two parts - General Ability Test (GAT) and Mathematics. The topics covered in Maths are from the 10+2 level while the GAT syllabus comprises current affairs, History, Polity, Geography, etc. In order to qualify for the exam, candidates must cover the whole syllabus well in advance with sufficient time for revision.

UPSC NDA exam pattern consists of the stages of the exam, mode of exam, total marks, number of questions, time duration, etc. Aspirants preparing for NDA must go through the exam pattern in detail. As per the NDA exam pattern 2022, there are two papers - Mathematics and General Ability Test (GAT). Both papers carry a total of 900 marks. NDA exam 2022 is conducted in two stages - written exam as well as SSB interview. Candidates qualifying in one stage will be eligible to appear for the next stage.

There are a lot of books available which are said to have helped candidates alot. The core books are RS Aggarwal, ES Ramasamy, Arihant and most importantly NCERT.

Question: What is salary of a NDA officer?

After completing the NDA course a candidates gets recruited as Lieutenant and gets a salary of Rs. 56100 which rises as per promotions, job tenure and risk level.

Question: What are the subjects for NDA exam?

No, it is one of the toughest exams in India. NDA is said to be the gateway for Indian boys as officers into the Indian Defense Services. Hence the recruitment process is quite a difficulty but not impossible to crack.

Question: How can I prepare for NDA exam?

To prepare for NDA it is advised to stick with the official syllabus and exam pattern, refer to the best books, solve previous year question papers and allot at least 6-7 hours for studies daily.

Question: Can I do self-study for NDA?

Yes, there are a lot of students who do self-study, in fact with the help of online study materials and free video lectures provided by some of the coaching institutes, self-study has developed as a good means to study. But the candidate must not skip the worth of coaching centres also, as it provides expert inputs into the studies.

Question: Which board is best for NDA?

There is nothing like which board is best or not, but yes CBSE students stand a better chance of qualifying the exams due to their syllabus and NCERT books. However, candidates from ICSE and other regional boards can also qualify given they prepare English efficiently.

Question: Is Pathfinder enough for NDA?

Pathfinder is a good book to prepare for NDA, but candidates re advised to not completely rely on it and explore more options recommended by experts, toppers etc.

Question: Is Ncert enough for NDA?

Yes, NCERT is enough to cover the curriculum but for current affairs and general awareness candidates must also refer to Arihant, Pathfinder, Lucents along with newspapers and monthly current affairs magazines etc.

NDA Cut Off 2022 will release by the Union Public Service Comm...

nda course of exam training and read this book slyybuss

Hello Vikash,
Hope you are doing good.
So as per your query, the best books for the preparation of  NDA exam are as follows:
For the purpose of,
1. Physics and chemistry, NCERT books are the best
2. Quantitative Aptitude, RS Agarwal
3. Mathematics, RS Agggarwal
4. For the total syllabus, ES Ramaswamy for NDA
Hope it helps you!!
Read More
Answer

The eligibility criteria to give the National Defence Academy exam is that the candidate's age must be between 16.5 to 19.5 years.

Candidates selected through this exam are eligible to become Lieutenant in Army,Flying officer in Air Force and can work at other such prestigious positions.

To get more information about NDA and its eligibility and application procedure,read our article here-

Hope you are doing well ! At least 60 percent in the science stream in class 12 th i.e. in PCM.

hope it helps you !

UPSC NDA 2 result 2022 declared at upsc.gov.in; how to check