How To Join NDA After 12th - Class 12th passed candidates are eligible to join NDA after 12th. Candidates should satisfy the NDA eligibility norms, submit the form, pass the selection process to join NDA after passing 12th class. Union Public Service Commission conducts NDA exam to fill officer level vacancies in armed forces. To apply for UPSC NDA, candidates age should be between 16.5 to 19.5 years and passed 12th class. There is no NDA eligibility 12th percentage. The written NDA 1 2021 is scheduled to be held on April 18, 2021. Students have to solve objective-type questions based on Elementary Mathematics and General Awareness Test. Candidates who qualify the written examination will be called for a 5 day SSB process at various selection boards. Candidates who clear the SSB interview will be called for a medical exam. Let's now discuss the How To Join NDA After 12th.
Latest- NDA 1/2021 application form released on December 30, 2020. The last date to apply is January 19, 2021. Start covering the NDA Exam Syllabus 2021 after filling the application form to prepare for the exam. 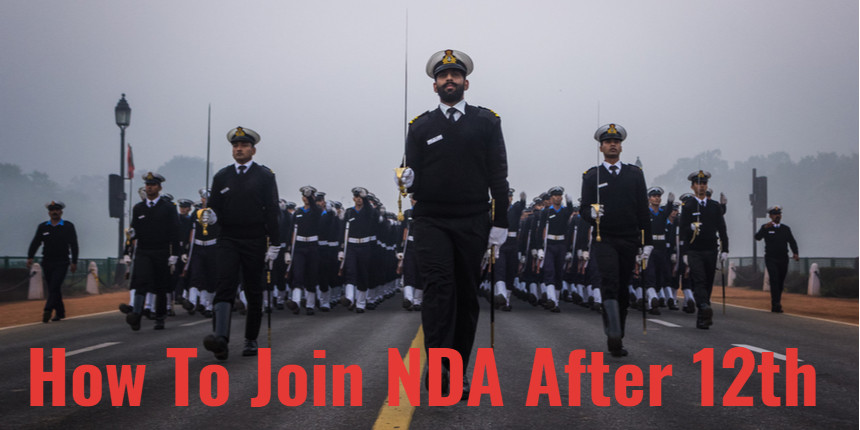 Who Can Join NDA After 12th Class?

How to Apply for NDA After 12th Class?

Candidates appearing in the NDA exam must keep certain documents ready before filling the application form. Check below documents required to join NDA after 12th.

How to Prepare for NDA after 12th?

Candidates appearing for the NDA exam must check the preparation tips from below.

Candidates who wish to join NDA after 12th class must go through the NDA 2021 selection process, candidates first need to appear for a written exam. Qualified candidates will be called for SSB interviews.

The written exam of NDA comprises two papers - Elementary Mathematics and General Awareness Test. The exam will be conducted for a duration of 5 hours. Paper 1 of NDA will be of 300 while paper 2 will carry 600 marks. Lets now discuss the SSB process of the NDA exam.

After the conference round, final results will be announced. Candidates who got recommended will be called for medical examinations at various centres.

Question: Can a commerce student apply for the NDA exam?

Yes, commerce stream aspirants can apply for the NDA exam.

Question: What is the age limit to appear for the NDA exam?

Candidates between 16.5 to  19.5 years of age with essential educational qualifications can apply for the NDA exam.

Question: Can a 12th appearing candidate apply for NDA exam?

Question: When will the UPSC release NDA admit card?

Candidates can download the admit card of NDA exam tentatively from March 30.

Candidates can check the various details about UPSC NDA answer...

5 days ago
Read More
View All News and Articles

Is The Date for Filling Form Of NDA is Ended?