SBI PO Cut Off Analysis 2021 - State Bank of India (SBI) will release SBI PO 2021 cut off to shortlist the candidates to the next stage and for the final selection. As per the SBI PO cut off analysis, the cut-off has been found to have been registering a continuous increase over the last four years.
According to the cut off analysis of SBI PO exam conducted in the year 2020 for the prelims phase, the cut off for general was 58.50 which was 12.50 marks less than the cut off of the test held in 2019. In the 2020 prelims exam of SBI PO, the cut off for OBC was 56, SC- 50, ST - 43 and EWS was 56.75. Candidates securing the SBI PO cut off 2021 will only qualify for the next stage. 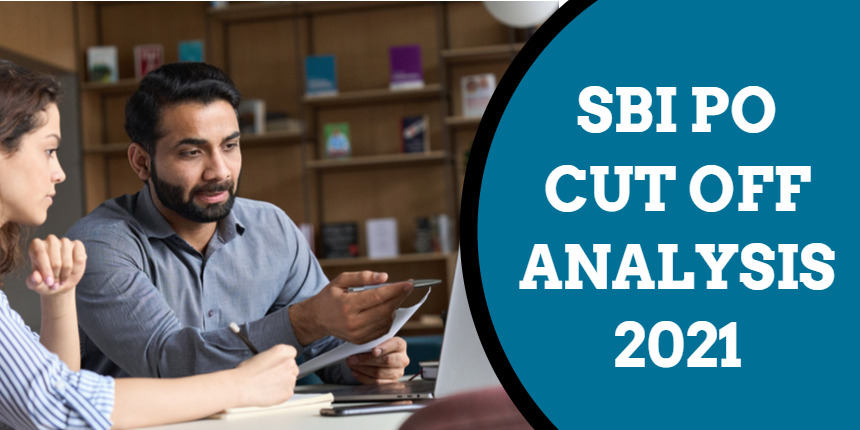 The authrotites will announce the cut off of SBI PO 2021 in three stages - prelims, mains, and final cut off after the interview. The determination of SBI PO cut off will depend upon the following factors:

According to the cut off analysis of SBI PO, the mains cut off has also been increasing since the past few years. In the year 2020, the mains cut-off for the general category remained 104.42 while in 2017 the general cut-off was 89.25. However, in the mains exam conducted in 2016, the general cutoff was 90. Go through the table below to get a complete idea.

The result of SBI PO 2021 will be released separately for each stage of exam in PDF format on the official website - sbi.co.in. The PDF of SBI PO result 2021 will contain a list of roll numbers of all the selected candidates. On the later stage, SBI will also release the scorecard which can be downloaded by using registration number and date of birth.

Question: Will I qualify for the SBI Clerk mains exam if I secure the sectional cut off?

In order to qualify for the mains exam, you must secure both category-wise sectional and region-wise SBI Clerk cut off 2021.

Question: How do I know that I have secured the required SBI Clerk 2021 cutoff scores?

You must ensure that you secure the category wise cut off of SBI Clerk mentioned in the cut off PDF.

Question: How is the SBI Clerk cut off decided?

In order to determine the cut off of SBI Clerk, the authorities consider the following factors:

Question: When is the SBI Clerk result for prelims expected to be announced?

SBI Clerk prelims result has been postponed due to COVID-19 outbreak and the date of result declaration will be announced soon.

What is the difference between SBI po and Ibps po

Hi,
SBI PO exam is only for SBI and its associate banks whereas IBPS PO exam is for rest of the public sector banks.
SBI PO has a higher salary + many more incentives. Work pressure is more in SBI. Opportunities for growth are more in SBI.
SBI is better leaving its work pressure aside.
Hope it helps...
Read More
Answer

If you want to know about SBI PO examination form, Rice Smart academy is one of the best academy for PO exam form  and provides online and offline coaching for SBI PO etc. For more information please visit https://www.ricesmart.in/exams-sbi-po-coaching/

I am scored 94% in class 12 science with pcms.all are said to me that to join engeeneering but I say no because they are not finding job now.so I want to take bsc with pms and after I write sbi po/ibps po my decision is right plz reply

Congrats for such a good performance!!

It all depends on you what you want to pursue. It solely depends on you what you have more interest in and what you want to be. Also BSc with PMS is really a great idea and is a very good basic ground for SBI PO/IBPS. However it is not true that Engineers are not finding jobs now. If that would have been the scenario, all the IT companies in India and  all over the world would have been empty. The new softwares ,websites , any new Car, even the buildings and many more thing around us would have stopped developing. I agree that there are cases  where Engineers can't find jobs but that happens in each field of study; even in the field like where students are preparing for PO/IBPS can't succeed after a various attempts.

Also a recent study says that the hiring rate of engineering graduates across all India was at 31% in 2020 which is higher rate of hiring compared to other fields of study in the country.

So basically saying it is not the field where you can't get job. It is the skillset that is checked in every field that you have to be the best at which could be gained out of hardwork and determination.

Hope it clears your doubt!!!

To become sbi po the age limit is 21 to 30 years. And nationality should be Indian.

The syllabus for this exam is

To become sbi po the age limit is 21 to 30 years. And nationality should be Indian.

The syllabus for this exam is