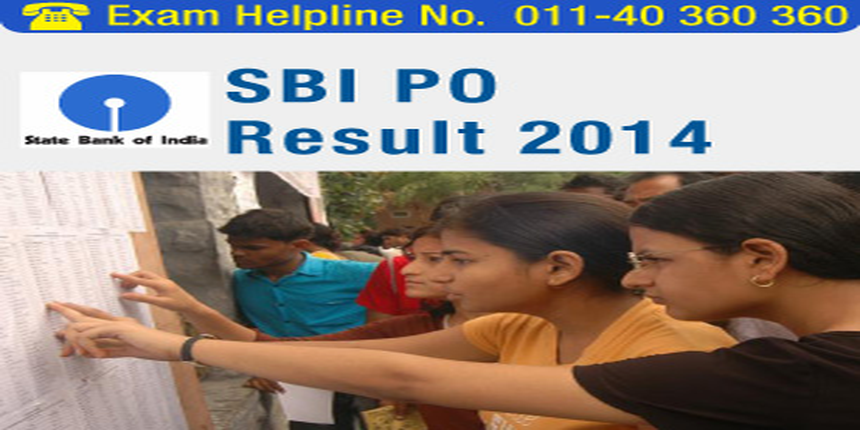 The Phase - II or Group Discussion and Interview round for the same will commence from October 8, 2014. Shortlisted candidates will get SMS and e-mail separately from SBI on the next level process.

Call-Letter for GD-cum-Interview and Bio-Data Form will be available on SBI official website from September 15, 2014.

According to the SBI PO 2014 guidelines, after the announcement of the SBI PO 2014 Cutoff for written test, the selected candidates will be called for GD/PI round. Final selection will be made on the basis of the performance of the candidate in the written test and GD/PI.

SBI PO Result 2014 is the outcome of the performance of the candidates in SBI PO 2014 written test and also the door to the next level – group discussion & personal interview round. Those candidates who qualify written test and GD/PI both will be offered PO designation in the bank.

State Bank of India notified the dates of the application for SBI PO 2014 earlier in April to fill as many as 1,837 vacancies of Probationary Officers. Out of the total vacancies, 758 vacancies are for General candidates, while 235 for SC, 439 for ST and 405 vacancies are for OBC categories, according to the notice attached with SBI PO Application Form 2014.

SBI PO Admit Card 2014 was made available for downloading on May 30.

With the announcement of the Important Dates, the bank also announced Paper Pattern and Selection Process.

I am doing gradution and this is the last year of my graduation.. may i eligible to this exam

The upper age limit for General category is 30 years, there's relaxation of three years for OBC(non-creamy layer) and in case of PWD-OBC, it's 13 years.

If am doing graduation in general subjects not honors in any subjects. After graduation can i fill SBI applications form?

Hi Arti,
yes you can fill SBI form after completing your graduation in any field or even in the final year of your graduation.
Honours degree is not mandatory.

my birth year is 1986. Am I still eligible for sbi po exam. I belongs to OBC category

There is a eligibility criteria to give the SBI po exams.

To be precise to write the exam a candidate should have not be born not later than april 1 1999 and not earlier than 1990.

As you can see you should be born in the year approximately between 1990-1999. therefore you are not eligible since your year is 1986. to get a detailesd information about the eligibility crieteria then click the link https://competition.careers360.com/articles/sbi-po-eligibility-criteria

As per the notice, the minimum and maximum age of the applicants should be 21 and30 years respectively as on 1stApril 2020. And you have completed your 21st on 4th January 2020, so you are eligible to write SBI PO 2020. The preliminary exam will held on first week of July 2020 and the Mains will held on First week of August 2020.
Read More
Answer
Answer Later
Report