SSC JE Cut off 2020 - SSC will release SSC JE 2020 cut off along with the declaration of SSC JE result at its official website. Candidates appearing for Junior Engineer exam must check the expected SSC JE cut off 2020. The expected cut off of SSC Junior Engineer 2020 is helpful to calculate the safe marks to qualify the exam. Applicants can also use SSC JE 2020 expected cut off to evaluate their preparations. As per the previous year trends, SSC JE cut off for Mechanical and Civil engineering is slightly higher in comparison to Electrical engineering. The exam conducting authority will release the SSC JE cut off 2019 paper 1 along with the declaration of the result. SSC JE 2019 paper 1 is scheduled to be conducted from October 27 to 30, 2020 across India and for Bihar it will be conducted on December 11, 2020. For more details candidates can check SSC JE Expected Cut off 2020 from below.
Latest Updates: Final SSC JE 2018-19 result has been announced on January 11, 2021. SSC has announced new exam dates for SSC JE on October 7, 2020. SSC JE Application Form 2020 released on October 01 on the official website. 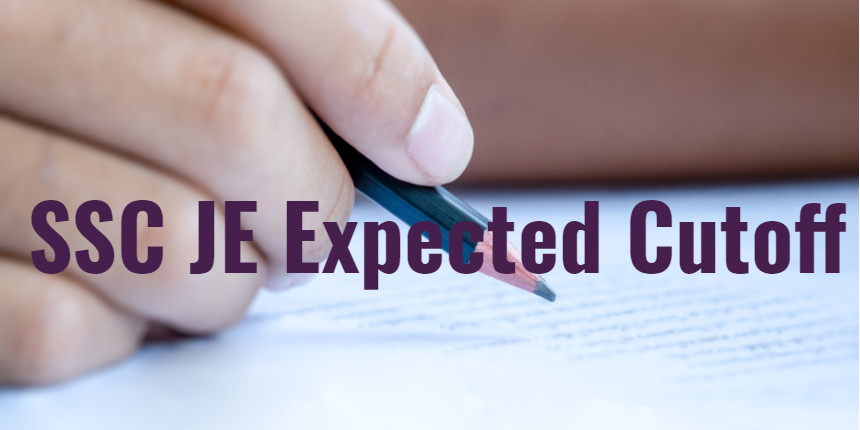 There are various factors on which expected cut off marks of SSC JE 2020 depends.

Candidates can check SSC Junior Engineering expected cut off for paper 1 from the table below.

Candidates appearing for SSC JE exam must check the SSC JE Expected Cut off 2020 for all categories. According to the SSC JE exam pattern, paper 1 comprises three sections - General Intelligence Reasoning, General Awareness and General Engineering. Candidates can check expected cut off marks for paper 1 to get an idea about marks required to qualify the exam. SSC JE previous year cutoff for paper 1 is given in the table below.

Candidates who qualify SSC JE 2020 paper 1 will be called for paper 2 which is descriptive in nature. The questions in paper 2 will be asked from General Engineering for 300 marks. Candidates must check SSC JE Expected Cut off 2020 for paper 2 to know about the overall marks required for the final selection. Applicants can check SSC JE previous year cut off from table below.

Question: What are the factors which affect the SSC JE cut off marks?

The factors which affect SSC JE cut offs are number of applicants, number of vacancies, difficulty of the exam.

Question: How can I check SSC JE cut off marks?

SSC will release the cut off of Junior Engineer exam at its official website along with the result.

Question: What are the benefits of checking the SSC JE Expected Cut off 2020?

Candidates can evaluate their performance and check their score from SSC Junior Engineer expected cut off.

Candidates can check the SSC JE result 2021 for all the stages...

Know the complete SSC syllabus for Junior Engineer paper 1 and...

Candidates can check the SSC JE selection process 2021 for the...

i have applied to SSC CHSL but payment is not happening because of photo issue. how to apply fresh application for ssc chsl? and i have also applied for SSC JE. if i apply to ssc chsl by creating new registration ID will they reject SSC JE because of two registration number on same documents?

You can not apply fresh SSC CHSL from there is no option for applying a fresh from and you can not create a new registration ID with the same name again. There is no way to apply for SSC CHSL again. I would suggest you to contact the officials so that they can guide you with further process. You will find the contact details in the official website. Combined Higher Secondary Level (CHSL) is conducted by Staff Selection Commission (SSC) to recruit the candidates for posts of Postal Assistants/Sorting Assistants (PA/SA), Data Entry Operator (DEO) and Lower Divisional Clerk (LDC).

Can Final Year BE Students apply?

The basic requirement for ssc je is that every candidate should have at least passed the Matriculation/ Secondary Examination Certificate or an equivalent degree from a recognised Board. But in addition to this you need to complete your diploma/ degree to be eligible for the examination. Therefore you cannot apply for ssc je while you are in your college.

For more info you can visit the following link:

hello,I have passed btech in 2020 and while filling ssc je online application form I entered cgpa 7.5 there and now I got provisional degree certificate and cgpa mentioned on it is 7.71 so is there any problem will come in further procedure?

see right now till the examination you will no face any isue, however at the last of the process of document verification you might asked to justify the mis match of scores in application form and original document. I hope since the original marks is greater then application forms score, there is less chances of cancellation. now it would totally depends on exams authority final decision.

Hi, i was successfully applied for ssc je but today i came to know that i did not mentioned date on photo. Is SSC gives chance to modify application which are rejected ??

In the official notification of SSC , it is said that without the date the application will be rejected. Now if it will give you a date of modification  isn't clearly mentioned anywhere. So if you can cancel your application if options available and apply newly to be safe. Also you can contact the SSC regional office or any helpline number and talk about this. They will guide you a way out.

I hope my answer helps you. Have a great day!