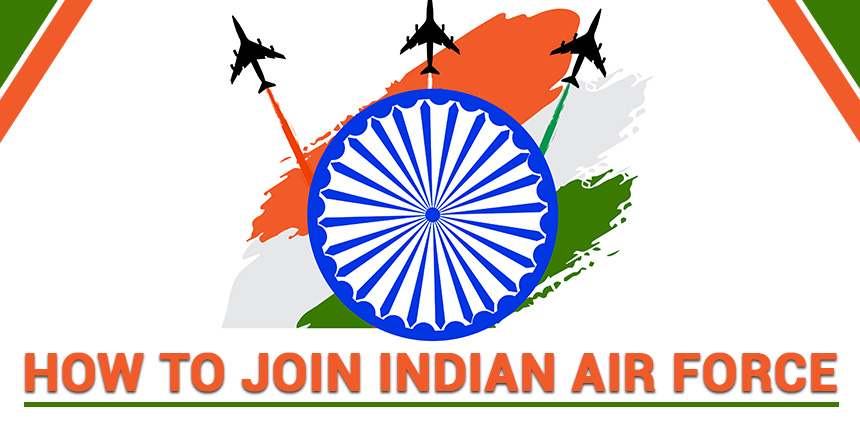 How To Join Indian Air Force?

Now let’s check eligibility criteria, education qualification, exam pattern and other details for all the entries one by one.

AFCAT is a highly preferred competitive exam to join the India Air force as an officer. The exam is conducted twice every year. AFCAT application form is released in December and June every year. The selection process of AFCAT comprises a written examination followed by an SSB interview. The selected candidates after the selection will be commissioned in Flying Branch and Permanent Commission (PC)/Short Service Commission (SSC) in Ground Duty (Technical and Non-Technical) Branches of Indian Air Force. For more details, candidates can check the AFCAT exam overview table given below.

AFCAT exam is conducted in February and September every year. Candidates must check the AFCAT eligibility criteria before filling the online application form. As per the AFCAT exam pattern test consists of 100 questions of 3 marks each with negative marking of one mark for every wrong answer. For more details, candidates can table given below.

As per the AFCAT syllabus questions will be asked from current affairs, military exercises, mathematics, English language etc. The test will be conducted online at various centers across the country. A detailed exam pattern of AFCAT is given below.

Candidates applying for ground duty in the technical branch also need to appear for the EKT exam after the AFCAT exam. Candidates can attempt EKT in mechanical, computer science and electronics & electrical engineering.

After graduation UPSC CDS is the most common entry to join Indian Air Force as an officer. The exam is conducted twice every year for the recruitment of candidates as officers. The application form of CDS is available on the official website of UPSC in the month of June and October. Graduate candidates between 19 to 25 years are eligible to apply for UPSC CDS. The selection process consists of a written examination, SSB interview and medical test. For more details about CDS exam candidates can check the table given below.

CDS exam is conducted in February and November every year. Candidates who want to pursue a career in Indian Air Force must check the best books for CDS exam for better preparation. As per the CDS exam pattern candidates have to appear for two papers of English language and general knowledge while candidates appearing for IMA also need to appear for elementary mathematics paper. For the CDS age limit, check the table below.

Candidates preparing for CDS must check the exam pattern thoroughly for effective preparations. As per the CDS syllabus, questions will be asked from mathematics, current affairs, basic English, general knowledge etc. Check table given below for detailed exam pattern of CDS.

After completing the 12th class or while appearing in the 12th class, NDA is one of the most common exams among the aspirants to join Indian Air Force as cadets. The exam is conducted twice every year for the admissions in the National Defence Academy for various courses. After 4 years, a graduation degree is awarded to all candidates. The application form of NDA is available in January and June every year at the official website of UPSC. Check more details about the UPSC NDA exam from below.

NDA exam is conducted twice every year in the month of April and September in offline mode across the country. Candidates who have passed 12th or appearing are eligible to apply for the NDA exam. Aspirants must check the eligibility criteria of NDA exam before filling the online application form. For detailed eligibility criteria, candidates can check the table below.

The selection of candidates is done on the basis of performance in written test, SSB interview and medical test. As per the NDA syllabus, questions will be asked from elementary mathematics general ability. The exam is conducted for two papers of 150 minutes. Candidates must score the cut off marks in both papers to pass the written exam. Candidates can check the exam pattern of NDA from the table given below.

One of the best ways to join the Indian Air Force after class 12th is Airmen Group X & Y entry. The exam is conducted twice every year for the recruitment of candidates as Airmen in the Indian Air Force. Candidates can fill the application form of Group X & Y in January and July. The upper age limit to fill the application form is 21 years. To check the detailed eligibility criteria candidates can check the table given below.

Candidates appearing for Group X and Y exam must check the selection process of how to join Indian Air Force after 12th. The selection process of Group X & Y comprises the written exam and physical test. Candidates first need to appear for the online exam. After the declaration of result candidates who clear the exam will be called for a physical test at various centers. Candidates can check the exam pattern of Group X & Y from the table given below.

It is one of the special entry to join Indian Air Force As officer after graduation. Candidates must have an NCC ‘C’ grade certificate with aggregate 60% marks in the graduation degree. Candidates will be called for SSB interviews on the basis of marks scored in the graduation exam. Qualified candidates have to appear for a medical test after the SSB. For more details, candidates can check eligibility criteria from the table given below.

Indian Air Force conducts recruitment drives in various colleges across the country. The selection process comprises a group discussion round. The shortlisted candidates from GD have to appear for SSB interviews at various centres followed by a medical test.

Question: How to join Indian Air Force after 10th class?

After completing their 10th class candidates can appear for IAF Group X and Y exam to join IAF as Airmen.

Question: How to Join Indian Air Force as a pilot?

Candidates after graduation degree can appear in AFCAT and CDS exam to join Indian Air Force as a Pilot.

Question: How to join Indian Air force After Bsc?

Candidates with B.sc degree in PCM can appear in the CDS exam conducted by UPSC twice every year.

NDA Exam Centres 2020 - UPSC has mentioned the exam centres of...

NDA after completion of xam for navy ,what is next step of my and govt

You can check the entire process in detail here
http://competition.careers360.com/articles/nda
Read More
Answer

why the NDA /NA examination are conducting for navy

I hope you are safe and healthy.

This is a national level exam conducted twice a year: NDA I and NDA II to help candidates make a career in Defense services. National Defense Academy & Naval Academy (NDA & NA) Examination will be a two-step process where candidates first need to take the exam and then qualify the personality test or interview conducted by the Service Selection Board (SSB). The UPSC is solely responsible for issuing guidelines for selection and the final conduct of the entrance examination.

I hope I answered your question.

For every exam there are some eligibility criteria. So for the NDA there are some criterias too. As you have spectacles so you are not allowed in NDA . The eye sight should be 6/6 without spectacles. You can appear in written exam but in medical test you will not select.

please give me the link or PDF of NDA ,NAandcds examination questions then answers

You can get the previous year solved question papers of NDA, CDS and NA examination on the following mentioned links. Click on them to get the papers of the said examination.

The Question paper is common both for NDA and NA, however, the merit list of selected candidates is prepared separately as per the choice made by them. You can refer to the NDA papers for NA also, as the question paper is same.

what is the difference between NA and NDA examination?

The NDA exam is conducted by UPSC for admission to the Army, Air Force wings of the NDA held twice a year.