Difference between IAS and IPS: Powers, Responsibilities, Salary and other aspects: The Union Public Service Commission (UPSC) conducts the civil services exam (CSE) on a national-level. The UPSC CSE is one of India's highly tough and competitive exams. UPSC CSE commonly also known as the UPSC IAS, is also India's popular exam. UPSC organises the exam annually to fill in various posts under the 24 administrative services. Out of these posts, the most popular ones are the Indian Administration Services (IAS) and the Indian Police Services (IPS). There is a general comparison amongst the masses related to the difference between IAS and IPS, that out of both IAS or IPS which is better, which has more powers. In this article on Difference between IAS and IPS, we will cover all these points by sharing some facts and also the powers, roles and responsibilities and IAS vs IPS salary. 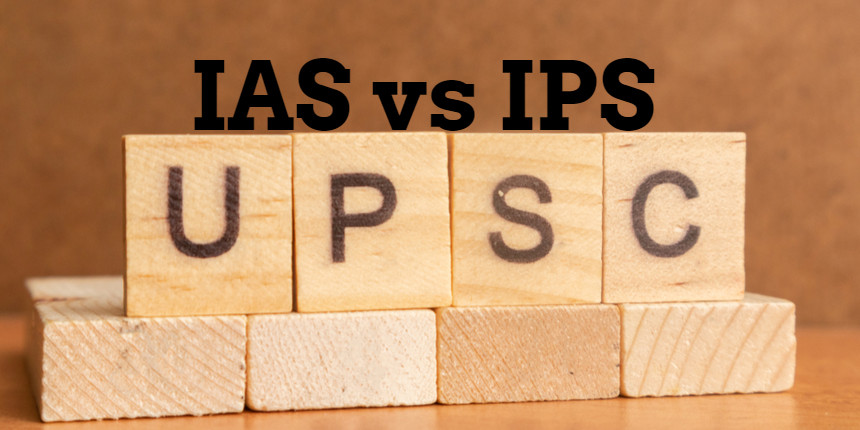 Every year, approximately 10 lakh aspirants apply for the UPSC CSE with a dream to get into one of these services, IAS or IPS. Candidates interested in administration choose IAS as their first choice while filling the detailed UPSC IAS application form (DAF), while those who want to look after law and order at grassroots levels, choose IPS.

What is the Core Difference Between IAS and IPS?

The core job of an IPS officer is to maintain peace in society, whereas IAS officers implement policies of the government and look after the administration. IAS and IPS collaboratively work towards becoming a part of India's bureaucracy. Both these posts are prestigious; however, there are some technicalities which make them differ from one another.

Detailed Difference Between IAS and IPS

IAS vs IPS Who is more powerful?

Question: Who is more powerful IAS or IPS?

Both are powerful, but when it comes to practical powers, an IAS is above the IPS.

Question: Should I choose IAS or IPS?

It depends on your preference, choice and interest. Both the posts are of the same prestige and reputation level.

Question: Is IPS easier than IAS?

No, both the exams are tough. Candidates will have to qualify the UPSC CSE (Civil Service Exam) to be eligible to choose between the IAS/IPS or whichever services you want.

Question: Do IAS officers get bodyguards?

Yes, IAS officers get bodyguards along with an escort vehicle.

Question: What is IPS salary?

After the 7th pay commission has been levied, the starting salary of an IPS is Rs. 56100 which increases as per experience, promotions and service record.

Question: Does an IPS officer have bodyguards?

Yes, IPS officers have bodyguards. In fact they get an escort team along with an escort vehicle.

22 hours ago
Read More
View All News and Articles

Which is the best indian economy book for CSE?

For beginners who are completely new to the domain of economics, go through NCERTs book for gaining the understanding of the fundamentals, the content is written is easy to understand language, and there are many good creators in YouTube as well who have uploaded these lessons as well, so if you're someone who feel more comfortable in understanding concepts through audio-video medium, you can refer this, other than that personally I have found Indian Economy by Ramesh Singh to be a great book as all the topics are covered in elaborative manner, and the language too is easy to comprehend, you can also refer Indian Economy by Sanjiv Verma which is equally a good option, other than this supplement your preparation with budget and economic survey, you can go through yojana magazine, and the economic edition of pratiyogita darpan too is quite good, if you have time you can go through that, even the regular book which comes out every month is pretty good for preparation of any compeitiive exam.

my aim is ias. i want to do m.a for optional. plz provide guidance.

if you do m.a then it's not problem you go for it and make focus on subjects liks which is in IAS exam like history , political science, geography etc

If you need more you go on byju's IAS ,vision etc website and attend sessions which is conducted by him

Hello there ,
Ofcourse,  commerce students can become IAS officers.
If you have completed Graduation in any discipline from recognized university then you are eligible for IAS exam.
The Civil Service Exam consists of 3 stages-
1. Preliminary exam
2. Mains exam
3. Interview round
To know more about an IAS officer visit the following link-
https://www.careers360.com/careers/ias-officer
All the best.
Read More
Answer

which degree is best for ias other than mbbs?

There is no such thing as best degree for UPSC Civil Service Exam, the eligibility criteria itself states candidates need to pass graduation in any discipline from a recognized University, there is no specific aggregate required in this case, and you can apply even in the final year of graduation, you are required to attain 21 years as on 1st August of the appearing year, so to answer your question you can go for graduation in any stream as per your preference, there is no restrictions regarding this, I'd you look at previous year toppers they come from as diverse backgrounds as that of medical/engineering/commerce/science to name a few, having humanities stream at 10+2 or graduation level with subjects like political science, geography, history, public administration, economics, sociology etc, only helps in the sense that there is considerable overlap with the syllabus of general studies and optional subjects, but as I said you can appear for this exam as well qualify it with graduation in any stream since there is no such restrictions in terms of having studied specific subject combinations, the exam is conducted in three levels that is preliminary, mains and interview.
Read More
Answer

for ias In class 11, which subject will be the best.

You can choose any of science ,commerce or arts stream based on your interest after your 10th for your 11th and 12th and then for graduation if you want to become an IAS officer.

you should be a graduate in any discipline and 21- 32 years old  , so you are free to do 10+2 and graduation in any subject.You can check upsc eligibility criteria at https://competition.careers360.com/articles/upsc-ias-eligibility-criteria/amp

choosing Arts or the humanities in your 11 and 12th and graduation can be really helpful for your UPSC  examination, this is because in Arts you will be learning subjects like history , polity etc which are a part of the UPSC syllabus so it will help you in your upsc examination.

******prelims exam :- it is objective paper and is of qualifying nature , so you just  need to at least qualify it to be eligible for mains examination, the score /marks obtained by you in your prelims examination is not added up or used in your final merit. Your prelims exam consist of 2 papers: -

You get 2 hours for each paper

******Mains exam. :- it is descriptive /written examination . There are a total of 9 papers  which are listed below:-

The compulsory indian language and english are qualifying in nature . You just need to qualify them. The marks obtained by you in these two papers will not be counted towards merit list.

******Interview :- After qualifying mains, you have to go through interview round, and it is more of test of your personality rather than knowledge.

For detailed information , go through

How To Prepare for UPSC Prelims- Mock Test -5