Candidates appearing for UPSC IAS prelims exam must check the UPSC prelims tips and tricks by the UPSC IAS 2020 topper AIR 17 Sarthak Agrawal to crack the IAS 2021 exam. The important tips to clear UPSC prelims exam include consistent study hours, mock tests and other important aspects. According to the UPSC topper 2020 AIR 17 Sarthak Agrawal, ‘After turning the first few pages in my GS-1 Prelims paper, I felt grudgingly confident that my first attempt at UPSC isn’t going to work out. Some of those agriculture and environment questions might have been written in Latin for all I cared about. 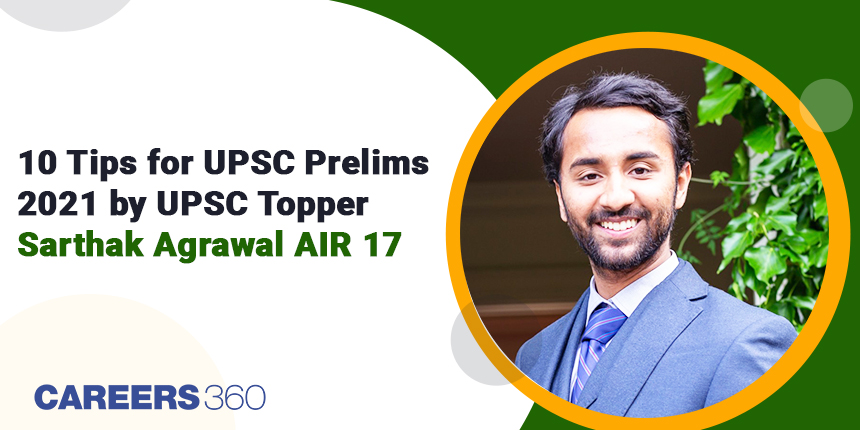 I decided to hang in there and tentatively marked a few answers. My experience with mock tests was such that I could barely attempt more than 20-25 questions with 100% confidence so clearing the prelims anyway relied on more than intelligence for me. Instead, I was hoping to use common sense, and wishing that luck was on my side that day (I could have traded a kidney for a vial of Felix Felicis).

In the actual paper, I don’t think I cracked even twenty in the first go. There were a few simple questions towards the end, but the others were a pain. I persevered and tried to apply my mind to at least get some more right.

Eventually, as it turned out, I got enough. Here are some tips from my whirlwind experience at UPSC Prelims 2020:

Candidates can check and know about the various details about ...

plz guide how to prepare for UPSC with agriculture as optional. and plz offer the detailed standard book list of recommended candidates for prelims and mains separately. plz also provide guidance regarding daily answer writing practice (with how to do self-evaluation).

Hope you are doing great ! Agriculture is a good subject as an optional ,also you must work hard for it but many toppers took subject like hindi, political etc ,and you decided to take a different subject ,however I am not saying that you won't qualify with this optional I am just want to say you will find some difficulties in this subject.

And for daily writing practice as all of experts says attempt mock test as many as you can .Go to different coaching ,attempt their daily sets ,it will help you a lot .

Here is everything about upsc 2022 ,you can once visit here;

Have a nice day!

Sir I am class 12th PCM stdent and want to pursue my career in civil services so i want to do BA simultaneously with the IAS preparation coaching please suggest me which subject did I take in BA which can help me in my IAS preparation?

In my opinion you can go for BA Hons. Pursuing BA Hons. is likely to have 4 core and 2 elective subjects in your curriculum. However, a student studying general BA has the option to select all 6 subjects.

Here is an alternative combination in BA best for IAS, some of the best BA subjects for UPSC exams include :-
You can take majors Political science or sociology. This subjects help one to crack any government exams like UPSC, SSC CGL and State Public Commission Exams and RRB too.
But, In my opinion, B.A. Hons is better than B.A. Programme as far as UPSC civil services preparation is concerned. UPSC requires “Something of Everything and Everything of Something”. B.A. Hons. provides in-depth knowledge at least in one subject and that can be our optional paper.

I want to become a commercial artist and an IAS, is it possible? and how?

Hope you are doing well ! It is not possible to do two different things at a time ,If you want to become an IAS officer also then for that you have to do a lot of hardwork and have to leave your art passion for sometime , if you become an IAS then there will lot of responsibility on your shoulder ,you will not able to time time for other thing.So choose one ,choose best!

In order to initiate your preparation, the first and most important step is to be well acquainted with UPSC Syllabus , learn it by heart as this will enable you to know what to read and what to skip.

As per the recent trends UPSC is framing Prelims questions also based on Mains syllabus, so have an integrated approach, don't segrete the preparation part thinking once you qualify Prelims you'll prepare for Mains that doesn't work.

To cover such a humongous syllabus you will have to make a timetable,set targets on a daily,weekly and monthly basis,that's the only way to complete this extensive syllabus.

Newspaper reading is equally vital part of preparation, you can start with any newspaper like The Hindu, or Indian Express on a regular basis to be updated as well as gaining knowledge which shall be highly useful to you in future exam preparation part. Put a more emphasis on editorial part, it will not only broaden your perspective but help a lot in answer writing,and make sure whatever opinion you form it should be well balanced. You can also make notes of this,it'll be very useful in answer writing.

When it comes to reading books ,start with basics, for each subject, you can do with NCERTs for this. This will build your foundation strong,as you progress, move on to other relevant books as mentioned below;

For Prelims, you can refer the following books:


Coming to Mains Exam, you can refer the following books for four General Studies Paper;


GS I - For History , Class XI NCERT book with India's struggle for Independence by Bipin Chandra,India after Independence by Bipan Chandra,History of Medieval India by Satish Chandra. For Geography refer World Geography and Geography of India by Majid Hussain, GC Leong's Physical and Human Geography with NCERT Class XI book.
For GS II - Polity and International Relations , refer Indian Polity by Lamikanth,India's Foreign Policy by Rajiv Sikri
For GS III - For Economics refer Indian Economy by Ramesh Singh, read ARC report along with Economic Survey and Fiscal Budget.
For GS IV - For Ethics refer a book named Lexicon by Niraj Kumar, also you can go through study material of IGNOU.

Remember to keep your resources minimal, read one book many a times instead of many a book one time, as you have to retain so much of information so rely on only limited yet trustworthy resources and revision is the only key for remembrance.

Writing mains is a huge task, for nine paper it requires immense practice along with knowledge. So, you have to start practicing answer writing in advance, even in a little way, There are many sites which provide questions on daily basis you can avail that. Try to give a holistic viewpoint while answer writing by providing political,economical and social aspect. You can get topper's answer sheet from various sites, try to analyze and study them minutely, you'll get an ideas about what to write, how to express and present viewpoint in organized manner.

Practice previous year question paper which you can get from the site of UPSC, in addition mock papers, and test series which you can get it from any of the sites exclusively dedicated to UPSC, all these will help in scaling up your entire preparation level.
Read More
Answer

It's so good see that you have already decided to become an IAS officer at this age.  Now if you have decided to pursue engineering degree I still believe that you should not compromise with college so you don't need to drop an year , just go for the best college you are getting at this rank. And prepare for your UPSC CSE exam .

I hope this helps!!