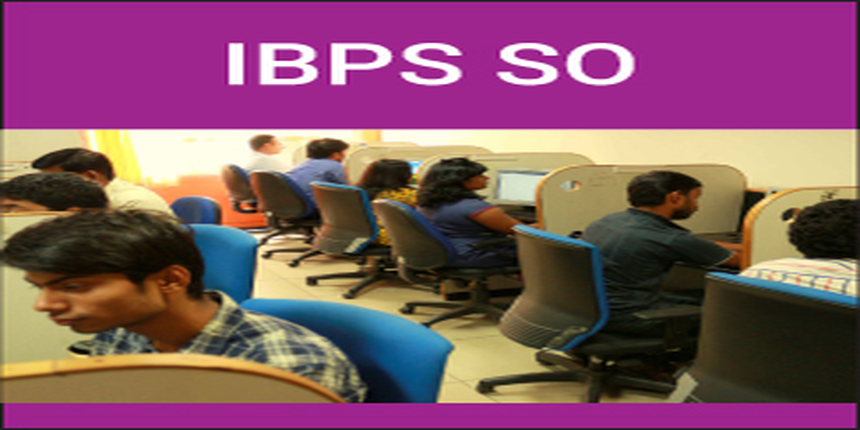 The details of IBPS Specialist Officers (SO) 2017 vacancies is given below.

Who can take IBPS Specialist Officers (SO) 2017?

IBPS SO 2017 can be taken up any candidate who is minimum of 20 years and maximum of 30 years of age. Apart from the age criteria, candidates must have desired qualification as per the post applied for specialist officer. The detail of IBPS SO 2017 eligibility criteria is mentioned on this page.

Why to take IBPS Specialist Officers (SO) 2017?

Candidates who wish to pursue career as Specialist Officer in any of the 20 Government of India undertaking banks can appear for IBPS SO exam. Banks recruit Specialist Officer in different departments like Information Technology, Agriculture, HR/Personnel, Law, etc. to perform specialized tasks related to the concerned departments. For example, Information Technology officer will take care of its software systems and look into the maintenance of servers, database, networking etc. While the Law officers have to handle legal and judicial matters related to bank.

Candidates can check IBPS SO 2017 Important Dates from the table given below.

IBPS SO 2017 score card is available now. Candidates can download score card by entering their login details. The examination authority has declared result IBPS SO 2017 on February 7 for those candidates who have secured qualifying marks as per their category. While preparing IBPS SO result 2017 the corrected scores obtained by each of the candidates in different sessions (if held) will be normalized using equi- percentile method. Scores up to two decimal points shall be taken for the purpose of calculations of IBPS SO result 2017. Candidates have to score subject wise as well as overall cut off score to qualify the written exam. All candidates who have qualified the written exam will be called for interview as per their rank in merit list. The final result of IBPS SO 2017 will be prepared after adding marks secure by candidates in online test and interview.

Candidates have to secure the cut off score as per their category to qualify the entrance exam. The exam conducting body will release IBPS SO cut off score 2017 of each stages at the time announcement of result. The cut off score is the qualifying marks which must be secured by candidates in order to become eligible for next stage of selection procedure.

The IBPS SO 2017 was conducted in online mode on January 28 and 29, 2017 as per the announced dates. IBPS SO 2017 exam was conducted separately for each post and candidates have to appear as per the applied post. The online question booklet was 200 multiple choice questions from Reasoning, English Language, General Awareness and Professional Knowledge. Candidates can detail of IBPS SO 2017 exam pattern like number of question, subjects, duration, etc. from the table given below.

Candidates, applying for the recruitment process, must fulfil the eligibility criteria of IBPS SO 2017 as given below:

Nationality: A candidate must be citizen of India, Nepal, Bhutan, Tibetan Refugee who came over to India before January 1, 1962, person of Indian origin who has migrated from Pakistan, Sri Lanka, Burma, East African countries of Kenya, the United Republic of Tanzania (formerly Tanganyika & Zanzibar), Uganda, Zambia, Malawi, Ethiopia, Zaire and Vietnam with the intention of permanently settling in India.

IBPS SO 2017 Age Limit and Qualification

Stay tuned to competition.careers360.com for more news and feature related to IBPS SO

IBPS so cutoff in prelims for marketing officer?

Thanks for connecting with Career 360.