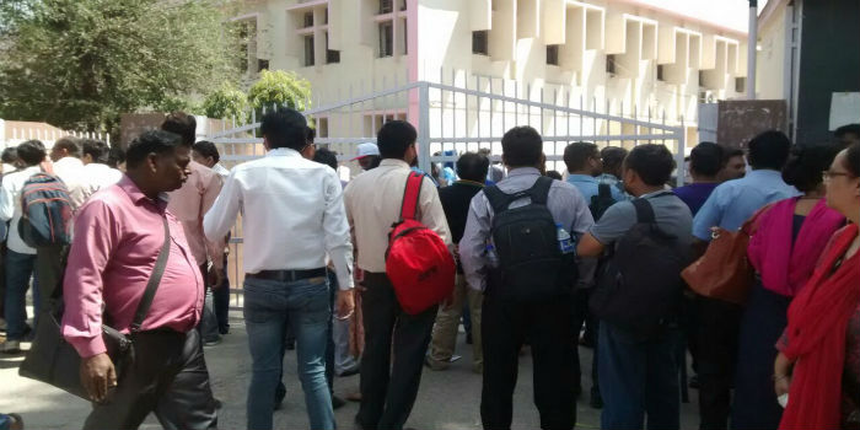 SSC CGL 2018 - Staff Selection Commission (SSC) is conducting SSC Combined Graduate Level (CGL) Tier 1 examination from June 4 to 13 and June 19, 2019. SSC CGL tier 1 exam is being conducted in multiple shifts 362 venues in 132 cities across India in online mode. The approximate number of candidates appearing for SSC CGL 2018 is 25.87 lakh. However, SSC has cancelled the examination at 4 venues in 9 shifts due to some technical errors. Candidates appearing for SSC CGL 2019 exam are able to download their admit card seven days before the examination. Along with the SSC CGL 2019 admit card, candidates will have to carry any one photo identity proof to the examination centre. The result of SSC CGL 2018 is expected to be announced in August 2019.
LATEST: SSC CGL Admit Card 2020 to be released on February 20. Check for exam city.

On the basis of the performance in SSC CGL 2018 Tier 1, candidates will be selected for Tier 2. SSC CGL 2018 tier II and III of SSC CGL 2018 will be held from September 11 to 13 and December 29, 2019, respectively. SSC CGL 2018 is conducted for filling up approximately 9000 vacancies in various Group B and C posts in government departments. SSC Combined Graduate Level (CGL) recruitment exam involves four-stage selection procedure – Tier 1, 2, 3 & 4. To know more on SSC CGL 2018 like admit card, dates, exam pattern, syllabus, cutoff etc read this article below.

Candidates can check below the important dates related to the application form, admit card and SSC CGL exam dates from the given table.

The answer key of SSC CGL 2018 for Tier 1 is released after completion of the exam. Candidates have to download SSC 2018 CGL answer key online by logging into their respective accounts using roll number, password (Date of Birth) and exam dates. SSC provides the facility to raise objections against the questions or answers. The window to raise objections of SSC CGL 2018 will be made available along with the SSC CGL answer key. For per answer, candidates have to pay Rs 100 in online mode. The objections raised in SSC CGL 2018 will be examined by experts. If the challenges are accepted then the fee will be refunded to candidates.

The previous year’s result analysis of SSC CGL is given below:

SSC CGL 2018 Tier 1 is conducted in Computer-Based Mode comprising four sections. According to SSC 2018 CGL exam pattern, Tier 1 exam carries total 100 questions for 200 marks. Candidates have to attempt the paper within 60 minutes. For correct answer in SSC CGL 2018 Tier 1, candidates will be allotted 2 marks while 0.50 marks will be deducted for a wrong answer.

The exam pattern of SSC CGL of Tier 2 have four papers. Paper I and II is common for all posts while Paper III and IV is for the posts of Junior Statistical Officer (JSO) and Assistant Audit Officer/ Assistant Accounts Officer. The online SSC CGL 2018 comprises total of 500 questions carrying 800 marks. There is negative marking of 0.25 for the wrong answer in Paper II while 0.50 marks will be deducted for incorrect response in Paper-I, Paper-III and Paper-IV. The Tier 3 of SSC 2018 CGL is a descriptive type test held for 100 marks.

The syllabus of SSC CGL 2018 for Tier 1, 2 and 3 has been prescribed by SSC. The syllabus outlines the topics that candidates have to cover for the Combined Graduate Level (CGL) exam. The standard of the question in SSC CGL 2018 exam will be of Class 10, 12 and graduation level. Candidates can check below SSC CGL syllabus 2018.

SSC CGL Syllabus 2018 of Tier I: The questions from General Intelligence & Reasoning, General Awareness, and English Comprehension will be of Graduation level while Quantitative Aptitude section will have class 10th level.

SSC CGL Syllabus 2018 of Tier II: The questions from SSC CGL Tier II exam will be of advance level which will test in-depth knowledge of candidates.

SSC CGL Cut off 2020 - Staff Selection Commission to release SSC CGL 2020 cut off along with resu...

I Have done dns leading to bsc nautical science. Can I apply for ssc cgl

see ssc cgl is a combined graduate level exam, so the minimum qualification is you need to have graduate degree in any discipline, it is a 4 tier system exam where tier 1 and tier 2 are computer based exam, where tier 3 and 4 is descriptive paper and computer proficiency test.

see if you have completed your bsc course and have certified you can surely apply. however  candidates appearing in the final year of their graduation can also apply, however they must possess the  Essential qualification on or before 01-01-2020.

i remember almost 500 word till now preparation for ssc cgl.but i start forgetting word .what i do .how i overcome form this problem.

Regarding this case, here are the tips which will help you to keep remembering the words-

Hold a good understanding on the the meanings of the words.

Use those words in a sentence to know the use of the words.

Keep revising weekly. It will help you to hold a good knowledge of the vocabulary.