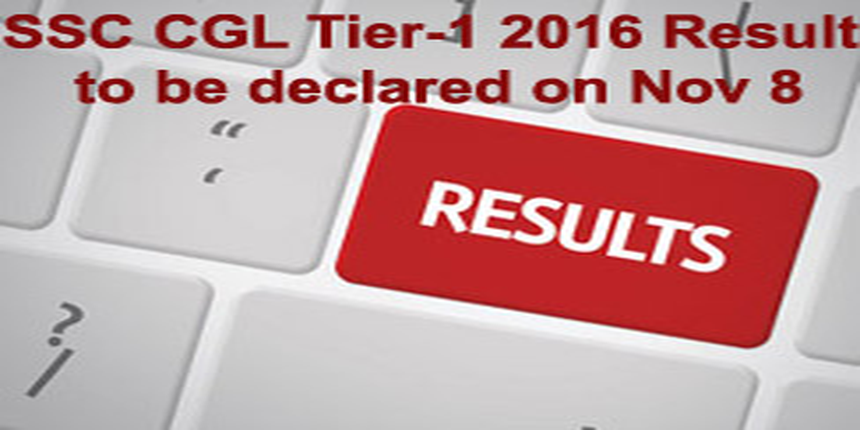 SSC CGL 2016 Result, which was expected in the third week of October, has been delayed by almost three weeks as the examination authority has announced November 8 as the fresh tentative result date for the exam appeared by about 15 lakh candidates.

“The result for CGLE (Tier-I)-2016, in context of the revised schedule of the examination, is tentatively proposed to be declared on 08.11.2016,” an official notification from Staff Selection Commission (SSC) read. Subsequently, the Combined Graduate Level Exam (CGLE) (Tier-II)-2016 would be tentatively held from November 30 to December 2, 2016.

The delay in the SSC CGL result 2016 has been apparently caused by re-examination of one batch of candidates who appeared for the test in the Second Shift (Batch-II) of the CGLE Tier-I which was held at 4.15 PM – 5.30 PM on 27.08.2016, officials said. “The Commission, due to administrative reasons, has decided to conduct a re-examination for one Shift,” the exam officials said.

The tentative date for re-examination is October 27, 2016.  According to SSC, “the re-examination will be conducted only for those candidates who had actually appeared in Batch-II on 27.08.2016.”

The exam authority is expected to announce further details in this regard very soon.

The Staff Selection Commission had conducted the Combined Graduate Level Examination, 2016 Tier-I in the Computer Based Mode in 43 Batches from August 27 to September 11 at about 415 venues in 96 cities throughout the country. Against 38.04 lakh registered candidates, about 14.99 lakh candidates actually appeared in the said Examination.

After the declaration of SSC CGL results candidates will be filtered for the next stage of exam that is SSC CGL Tier-II on the basis of SSC CGL cutoff 2016.

Stay tuned to www.competition.careers360.com for more news and updates on SSC CGL exam.

anyone solve my problem I am too much confuse while thinking about career between UPSC and SSC CGL.from which i start to preapre

SSC CGL and UPSC, both these exams have different pattern which I've discussed below-

To give you a basic idea about UPSC exam, it consists of three level-


Preliminary numbers are not added in the final list, you just need to score the required cut offs against your category.It mainly consists of GS Paper-I and CSAT. Both consists of 200 marks, MCQs based.


Mains is more of a subjective type, one needs to write answer for Four General Studies Paper,Two Optionals, One Essay, two language paper, there are total nine papers here. 250 marks for each paper, total is 1750


You can go through the gradual steps as mentioned below in order to start your preparation for UPSC.

Be well acquainted with UPSC Syllabus, learn it by heart, that's the most crucial step to crack this exam, to know what to read and what to skip. In addition to this, never ever make a differentiation between prelims and mains, what I mean is do not prepare separately for each, because nowadays what's happening is even in prelims, UPSC frame questions based on Mains syllabus, So, the first towards preparation shall be a combined preparation for both.


Read any newspaper like The Hindu, or Indian Express on a regular basis to be updated as well as gaining knowledge which shall be highly useful to you in future exam preparation part.


Start with basics, for each subject, you can do with NCERTs for this.


As you progress, move on to other relevant books, keep your resources minimum like Polity by Laxmikanth, History of Modern India by Bipin Chandra etc.


Start practicing answer writing in advance, even in a little way, writing mains is a huge task for nine paper, it requires immense practice along with knowledge.


Practice previous year question paper which you can get from the site of UPSC,in addition mock papers, and test series which you can get it from any of the sites extensively dedicated to UPSC, , it's highly important to evaluate your performance while doing so.


Prelims is mcq based, but still it requires knowledge coupled with speed, and for mains, as I already mentioned the importance of answer writing.

For SSC, you can do the following steps-

Make a timetable and start with small steps.
To initiate with any exam, first of all go through its syllabus. That's very important because SSC and Bank even though have same subjects in their examinations, but in reality things are different in the sense you may find SSC often repeats its question, there's no sectional timing in SSC unlike Banking exams, and also the level of question whether it's Maths, English or Reasoning is comparatively easier in SSC. You can go through previous year questions to know more details regarding this.
Maths and English form the crux of SSC CGL Exam as these subjects are given huge importance in Tier-I and Tier-II, so from now only, you can work on these subjects,make a habit of reading a newspaper everyday, you can choose between The Hindu or The Indian Express to keep yourself updated, developing this habit will brush up your knowledge which will be very useful in General Awareness Section of SSC CGL. At later point, you do not have to mug up all news at once.


You may refer the following books-

Make sure to keep your resources minimal, also go through mock tests or test series regularly at later point when you're near to appearing for examination.
.
SSC CGL consists of four level, first two being online in mcq format, then descriptive test, data entry and computer proficiency test. It doesn't have interview. On the other hand, UPSC requires a much more detailed and comprehensive study of subjects such as History, Polity, Economics etc so if you don't have a liking for humanities subject, you'll have a hard time preparing for UPSC. In the last few years, it's not just UPSC, even with SSC competition is increasing day by day. So, choose only one among the two because each will require a focused and single-minded approach in order to succeed.
Read More
Answer
Answer Later
Report
4 Views