Staff Selection Commission has conducted the first shift of SSC CGL (tier I) second day exam on March 4, 2020. The test has been held in online mode for a total of 200 marks. On the basis of feedback received from the candidates who took the first shift of SSC CGL held today, Careers360 brings a complete exam analysis in the article below. By going through SSC CGL exam analysis, candidates who are yet to appear for the CGL exam for remaining shifts and slots from March 4 to 9 can get an idea about the types of questions asked in the exam, the difficulty level, and the good attempts. 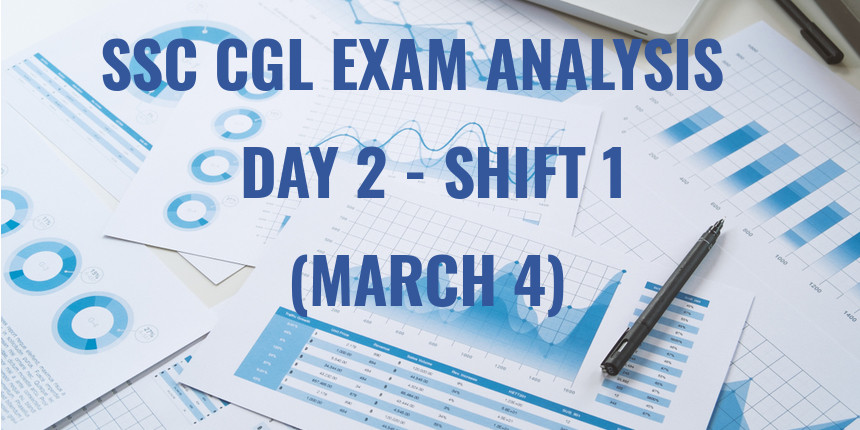 SSC CGL 2020 for tier I exam is being conducted in online mode from March 3 to 9. The test is conducted in four stages - tier I, II, III and IV to recruit candidates as Group B and C posts in various ministries/ departments/ organizations such as Indian Audit and Accounts Department under CAG, Intelligence Bureau, Ministry of Railway, Ministry of External Affairs, Central Bureau of Investigation, Central Bureau of Narcotics, National Investigation Agency (NIA), etc. Candidates who secure the SSC CGL cut off for all the stages are considered qualified for the posts.

As per the exam analysis of SSC CGL for the day first shift of the day 2 exam, the level of the exam was easy

The SSC CGL tier I is conducted was conducted for a total of 200 marks wherein there are questions from four sections - General Intelligence, General Awareness, Quantitative Aptitude, and English Comprehension. Each of the four sections contains 25 questions of 2 marks each.

Candidates must appear in the exam along with the SSC CGL admit card. The admit card is being made available to the candidates, 4 days prior to the date of their respective exam.

i m non medical student and i hav main interest in chemistry... but i also want to do ssc cgl preparation so i m thinking of doing graduation in an easy subject and side by side coaching of ssc cgl....i m too confused in making my mind decide between two options...and also subjects in ba eng?

Since you have interest in chemisty thus you can do Bsc in Chemistry and side by side coaching of SSC CGL exam, I would recommend you go give SSL CHSL and other exams with your graduation so taht you would have an idae of type of questions answered. After your graduation you can give CGL exam.

As per the SSC CGL eligibility criteria the open learning course or correspondence should be done from college or university affliated to UGC. Since Delhi University's School of open learning is affiliated to it so you are eligible for ssc cgl.

Im in final year. My age is 19. Can I apply for ssc cgl exam

Yes, you can apply for SSC CGL exam. The eligible age group for the exam is 18 years to 32 years.

Academic Qualifications are Bachelor’s degree from a recognized University.

I attempted 48 questions in exam? I belongs to SC Caste. is there any chance to qualify for tier2?

Hello.
Your marks cannot be predicted on the basis of the number of questions to attempt, firstly I will suggest you to wait for the release of official answer key  then you can probably crosscheck the number of correct  answers and can predict your expected score then you can compare it with the past year analysis of cut off which may give you hope for chances.
Best of luck.
Read More
Answer
Answer Later
Report
19 Views

how many candidate apply for aao post in ssc cgl