Candidates can click here to download and check their SBI Clerk 2016 Score Card. Earlier, SBI Clerk 2016 score card was scheduled to be released on June 24, however, SBI has released it a day in advance. 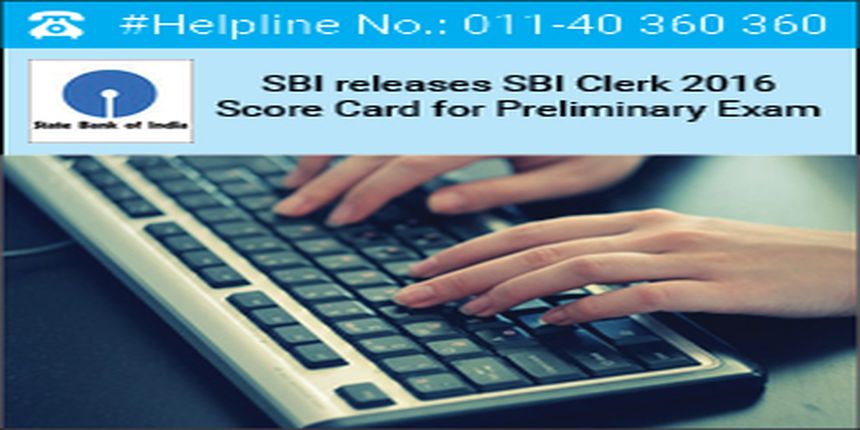 SBI Clerk result for main examination will be declared in the month of July 2016, based on which candidates will be called for interview round (subject to Govt approval) for recruitment to 19575 vacancies in clerical cadre of the Bank. SBI Clerk 2016 score card has been released only for those candidates who have scored qualifying marks in the online exam.

SBI Clerk 2016 has been conducted for the recruitment of Junior Associates (Customer Support & Sales) & Junior Agricultural Associates. In this recruitment drive for clerical positions at the SBI, it’s expected that over 30 lakh candidates have applied.

SBI Clerk Answer Key 2021 – Candidates can go through the answ...

i am trying hard but failing to make plans now seriously it is late for weak like me of age 21 still not having Iq nor English no Knowledge GA CA nothing nor getting how to study Dont know how People cracks upsc poor me failing in Banking scored 53/100 in Ibps clerk easiest exam i failed. Late me

Don't think of it like that. Every exam is tough and have some hardness. You shouldn't be feel like this. You are 21 and you have 7 years more to participate in the exams. You shouldn't think of it like this. Take it in a positive way. Clear your mind and start reading according to the syllabus. Practice more problems and don't compare yourself with others. You can do it until and unless you stop trying for it.

I hope you get my point. Don't break your rigor and keep on studying.

All the best for your future endeavors!

The relaxation is as follows for SBI CLERK exam

The relaxation is as follows for IBPS clerk entrance exam

Respected Sir/Madam, please reply what is the ex serviceman cutoff marks for SBI clerk preliminary exam 2020 for only madhya Pradesh

Ex serviceman cutoff marks for SBI clerk preliminary is around 60 for general category, while less than 50 for other categories.

Although the cutoff varies time to time so if you score between 50-60 score then you will surely crack the exam.

I hope it helps,

what is the cutoff marks of ex service man candidate in SBI Bank clerk exam 2020 pre and mains respectively in madhya pradesh.and when we get the notification next exam of SBI clerk 2021 ?

Hello, For SBI clerk prelims the cut off would be in the range of 65 and for mains it is range of 50 approximately. The SBI clerk 2021 application is expected to be opened form first week of January. You can refer this link on more details on the exam https://competition.careers360.com/articles/sbi-clerk-notification