The SBI Clerk 2016 Preliminary exam result can be checked through the official online window by entering the candidate’s roll number or registration number and password or date of birth in the relevant boxes. 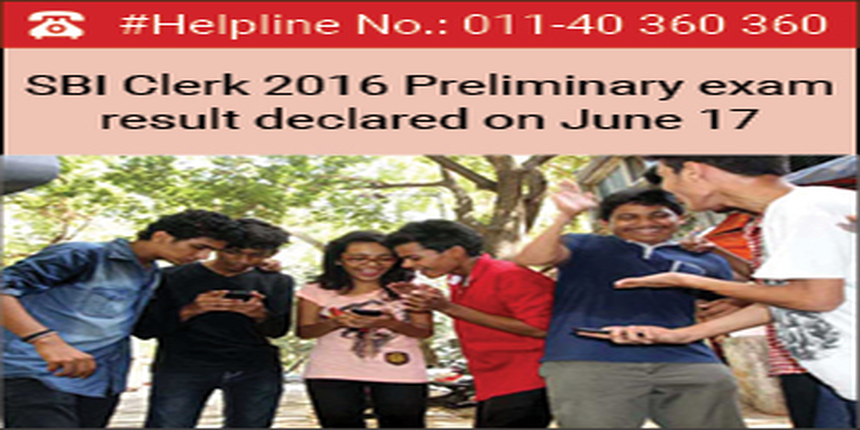 Successful candidates of SBI Clerk 2016 Preliminary exam have been called to appear in the Main exam, which is the second stage of the bank’s recruitment process. The SBI Clerk 2016 Main exam is scheduled to be conducted on June 25 and June 26.

Out of the total vacancies announced, as many as 7,282 are available for General candidates, while other vacancies are divided in SC, ST and OBC categories.

Over 30 lakh candidates had reportedly appeared in the Preliminary exam held from May 22 to June 5.

SBI Clerk Answer Key 2020 – Candidates can go through the answ...

How to Prepare for SBI Clerk Mains Exam?

How to Prepare for SBI Clerk Mains Exam? - State Bank of India...

Life is full of varied experiences, so don't be disheartened about anything, it may be easier said than done but remember that every phase in itself is fleeting, if you have dreams and want to achieve it then you have to work on yourself and all those things that's holding you back, we all have our own struggles in life and it's upto us how we cope or deal with it, having a positive mindset and attitude is highly important, else the journey ahead will be much more difficult to handle.

It's never too late to start afresh, let the past or whatever not so good thing happened rest in its deserving place, live for now which is the present moment, don't lose the self-belief ever, it's only thing that makes one keep going. Work diligently towards the dream you've, and if you seek any guidance regarding career or course, there are many experts here to help you out always.

Sir I am 21 years old and still not having any goal i am graduate but from local college as i wasted 3 years not went to college neither done anything is as per my situation one who is weak in everything having low English can even crack sbi clerk in a year preparation from scratch i really doubt ?

First of all, keep your hopes high. You've got the chance on this Earth as a human, that means you are able to do what you aspire, condition is that you should be determined and dedicated hard worker.

Feeling lost and hopeless sometimes is common, but you need to keep your will power strong enough, so that you can prevent this sadness from overpowering your soul.

Confide in a person (you said you've no friends, no problem, make one or talk to any of your peer sibling/cousin). Believe me, opening your feelings infront of someone helps a lot. The person will comfort you and suggest you from his own point of view.

If you feel that you can't crack the desired exam, keep it aside for a while and give yourself a new headstart with that exam as a challenge of life and you can do whatever you want to do.

Minimum age required to be eligible for SBI Clerk is 20 years and you are only 21, so you still have a chance to begin your preparation because there are many people who qualify SBI Clerk like bank exams in their 1st attempt and that also in just 1 year preparation or even less, so even if you are starting from scratch you have plenty of time to prepare.

Follow the below tips to prepare for SBI Clerk :-

For more detailed preparation tips for SBI Clerk by our experts, you should refer to the link given below :-

No i am feeling of ending life at age 21 really i cant tolerate the pain of not having goal i had beautiful past enjoyed my life but past few years was hell to me i lost everything my close one died my friends gone i miss life which was going in flow that coaching after school i feel its late now ?

It is really surprising to hear of being demotivated at a quite young age. As much as we discuss about this, the change and passion for success should come from within you. We can just answer your question.

So what if you wasted some years of your life? You cannot bring back a day from those years. Instead you will be adding extra days to those years as long as you feel demotivated or confused or upset. The world lives on thre Principle of "Survival of the Fittest". Only those are brave, strong and determined, can win the race. The world is so fast paced that it doesnt remember people who have not achieved anything.

So its time you pull up your socks rather than dwelling in the past. If you continue to do so, you will only be adding agony to your years. Today it has been some years and few months later it will be more than now. You will just keep counting the no.of years you wasted instead of buckling up and preparing yourself.

Problems do not confine themselves to a single person. Every Individual has his/her share of problems. Only those who fight back can really make it big. I personally think there is no point in crying over spilt milk while there is hot cup of coffee on the table.

As much as we discuss about this, it is you who has to pull up his socks and decide to move on and move ahead. If you think you are depressed, please see a Psychologist. But of it is just a phase, you need to buckle up.

So pull up your socks, tie up your shoes and start running to win the race. We want to see you at your success.

All the best for your life!!

see right now you are in perfect stage to start a new journey of life, let it be a higher study or preparing for government exams or preparing for any other entrance exams, see if you are graduated I suggest you to make your skills in certain courses like ms office, ms excel, accountancy, software related with official work, computer proficiency , communication skills etc. see due to corona pandemic our economics has gone through a serious condition and nation wide it will impact, so if you are only looking for government job it may be a problematic for you in near future and there is less chances of government bank or other post recruitment in coming years. so right now do some thing fruitful for a better future. you can start by following a routine, doing your every day works, also includes physical exercise atleast of 20 minutes which will help you to make your self feeling strong and read good books, journals to make refreshment.

Is age 20 is late to start all new i feel so low and depressed. is it possible for weak student like me to crack sbi clerk in 2 years preparation? I am stucked in past feels like lost no ray of hope i dont know what to do i am scared of newspapers feels it will be difficult for me ?

Actually it's better late than never but the best thing is you are not late at all for SBI PO preparation
Minimum age required to be eligible for SBI PO is 21 years and you are only 20, so you are not at all dear

Now , if you feel like you are  very weak to prepare for SBI PO then let me tell you that there are lots of people who are average at studies but they work hard and clear even the most competitive examination like UPSC , so if you work hard and prepare will then you can definitely crack SBI PO
Also,
there are many people who qualify SBI PO etc bank exams in their 1st attempt and that also in just 1 year preparation or even less, so even if you are starting from scratch and you want to prepare in 2 years then you have plenty of time to prepare ,

Go through newspaper daily for General Knowledge and current affairs

SBI Clerk Result 2020 to be Announced Soon for Prelims Exam