The State Bank of India (SBI) has released admit card of SBI Clerk 2016 for the Main exam on June 17 for candidates who have qualified in the Preliminary round of the bank’s recruitment process for its clerical posts. SBI Clerk Main exam is the second stage of the recruitment drive to fill up 19,575 vacancies in the bank’s clerical cadre.

The SBI Clerk 2016 Main admit card can be downloaded through the online window by entering the candidate’s roll number or registration number and password or date of birth in the available boxes. 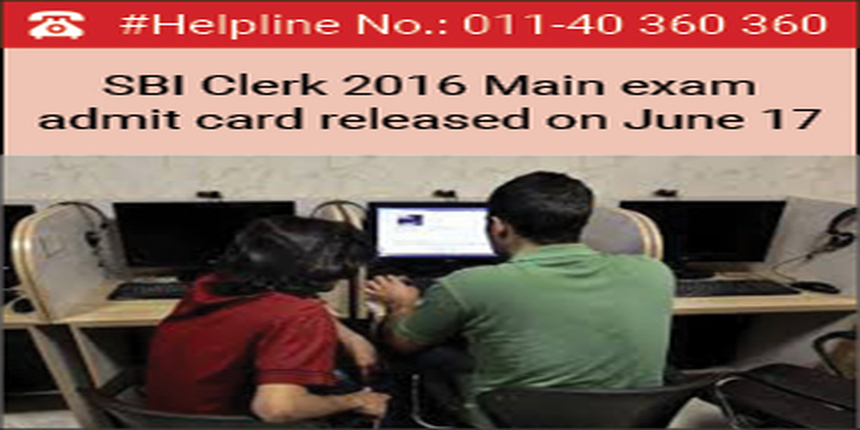 Qualifying candidates of SBI Clerk 2016 Preliminary exam have been called to appear in the Main exam, which is scheduled to be held on June 25 and June 26.

Of the available vacancies, a total of 7,282 have been announced for the General category, while the remaining is available for SC, ST and OBC candidates.

Over 30 lakh candidates were reported to have appeared in the Preliminary exam conducted from May 22 to June 5 this year.

SBI Clerk Answer Key 2020 – Candidates can go through the answ...

How to Prepare for SBI Clerk Mains Exam?

How to Prepare for SBI Clerk Mains Exam? - State Bank of India...

SBI Clerk 2020 Result for Prelims Exam - Know all the informat...

I am of age 20 done nothing in till date just slept no goals no reading habit but wants to crack Sbi clerk as it is last option but feels it is late to start from scratch with fear of losing fear of age fear of capabilities , i feels i am to late to start now and also my friend are doing well i lost

Ayush, you have already started your way to success by showing your interest here. This is the first and most important step. It's better late than never. Candidates from any stream can apply for SBI clerk exams.

There are some eligibility criteria for SBI clerk exams, candidates must have a Graduation degree in any stream from a recognized University. Appearing or final year/semester students can also apply. However, this is subject to the condition that if they are provisionally selected, they’ll need to produce proof that they have passed the graduation examination on or before the mentioned date in the official notification. Candidates must have atleast 50% in their 10 th board exams to be eligible for this exam. The minimum age limit is 20 and maximum age limit is 28, considering general category, so it won't be a problem for you. There are relaxation of age for other categories.

Syllabus for SBI Clerk prelims is English language, numerical ability, and reasoning. For more detailed information about this exam, check out the link below

Most importantly, never loose hope, it's good that you are willing to start. You are sure to succeed if you would maintain hard work with consistency.

I am totally lost at age 20 with no friends,no goal dont know what to do i just sleep all day&cry like kid at night .I was inconsistently preparing for sbi clerk from 18 age but now feels it is impossible to crack as i am waste&inconsistent with lack in English .I feels like escaping&start all new

First of all, keep your hopes high. You've got the chance on this Earth as a human, that means you are able to do what you aspire, provided, you do determined and dedicated hard work.

Feeling lost and hopeless sometimes is common, but you need to keep your will power strong enough, so that you can prevent this sadness from overpowering your soul.

Confide in a person (you said you've no friends, no problem, make one or talk to any of your peer sibling/cousin). Believe me, opening your feelings infront of someone helps a lot. The person will comfort you and suggest you from his own point of view.

For English skills, use this lockdown period to gather and go through the online study material that will help you. Slowly and steadily, if you practice, you'll gain good English language skills.

If you feel that you can't crack the desired exam, keep it aside for a while and give yourself a new headstart. Pick up a different line and just get into it. Work as hard as possible. You'll definitely achieve it.

Remember, Humans can do anything!

I wasted 3+ years in just sleeping , crying&fear of not having capabilities to achieve anything . now i am age 20 and want to crack Sbi clerk in a year but feel it will be impossible as grammer is weak my potential is weak i have lots of responsibility burden as family fighting with health&financial

Ayush, it is really heary wrenching to hear of being demotivated at a quite young age. As much as we discuss about this, the change and passion for success should come from within you. We can just answer your question. But again if you have been preparing for Bank Exams from the age of 18, that shows your grit and determination. So what if you wasted 3 years of your life? You cannot bring back a day from those 3 years. Instead you will be adding extra days to those years as long as you feel demotivated or confused or upset. The world lives on thre Principle of Survival of the Fittest. Only those are brave, strong and determined, can win the race. The world is so fast paced that it doesnt remember people who have not achieved anything. So its time you pull up your socks rather than dwelling in the past. If you continue to do so, you will only be adding agony to your years. Today it has been 3 years and few months later it will be 4. You will just keep counting the no.of years you wasted instead of buckling up and preparing yourself. Problems do not confine thenselves to a single person. Every Individual has his/her share of problems. Only those who fight back can really make it big. I personally think there is no point in crying over spilt milk while there is hot cup of coffee on the table. As much as we discuss about this, it is you who has to pull up his socks and decide to move on and move ahead. If you think you are depressed, please see a Psychologist. But of it is just a phase, you need to buckle up.
Read More
Answer

There is something called Acceptance and Commitment Theory in the field of Psychology. It is an intervention method that uses acceptance and meaningfulness in different ways. It is not a method of eliminating any particular behaviour. Rather it is acceptance of one's own inhibiting behaviour and mould our lives accordingly. This means you accept that you are no longer as curious you were before. But you mould your habits and lifestyle or working towards your dream in a way that you still work in fulfilling your passion. Maybe you should sit and write the reason you are no longer curious or passionate about something. If it was something like a bad experience or bad feedback that you had or heard, you should write it down and then evaluate the truth in it. You should maybe check the facts and see if what you felt or heard still holds true. And then you write down your current thoughts on your passion. It might be the lockdown talking or it might be because you found something else interesting. If it is just the lockdown talk, be assured that you will feel fresh once this situation passes. But if it has been there with you for a while, then accept the fact that your priorities have changed. Choose the correct course of action and decide on it. If you still want to stick on to your passion, maybe you need to rejuvenate yourself and get back on track. So do not shy away from thoughts that take away your curiosity. Face them and write them down. It might be laziness, it might be the discovery of a new passion, it might be lockdown, anything. Just write it down. Allow those thoughts in your mind and rationalise when you can and fight with them when you have to. Discover what is more important. Your flee of emotions or your passion. Set goals to act responsibly keeping in mind the long term. You cannot come back after a year and try to be passionate again. By then you would have lost the rhythm. Always remember that this is just a mind game and you need to reason with your brain and train your brain and not the other way round.

My biggest problem i started bank prep.at age 18 currently age 20 and as i not continued it so this 2 years decline confidence that 2 years me nhi hua&having save English phobia so if i start at age 20 it is late and will not be able to crack it in years Please accordance past&current scenario help

Do not worry what you need is just proper guidance and tutor. Careers360 has launched its e-learning platform go and check the link and prepare accordingly in the lockdown you will get the success.