UPSC IAS 2018 Topper Interview - UPSC released the Civil Services final result for UPSC IAS 2018 on April 5, 2019 in online mode. A total of 759 candidates (577 men and 182 women) were recommended for the appointment to various services like IAS, IPS, IFS, etc. In this exam, Kanishak Kataria, who was working as a data scientist in the silicon valley of India, secured the first rank and became UPSC topper. Prior to this, he was working in Samsung Electronics in South Korea with a handsome package. Read the complete article to know about his experience, marks in the exam and how he prepared for the UPSC Civil Service exam and at last what he did to relax himself.
Latest: UPSC has released the new exam dates for UPSC IAS Preliminary and Mains exam on June 05, 2020. As per the new dates, the preliminary will be held on October 04, 2020, while the Mains will be held on January 08, 2021. 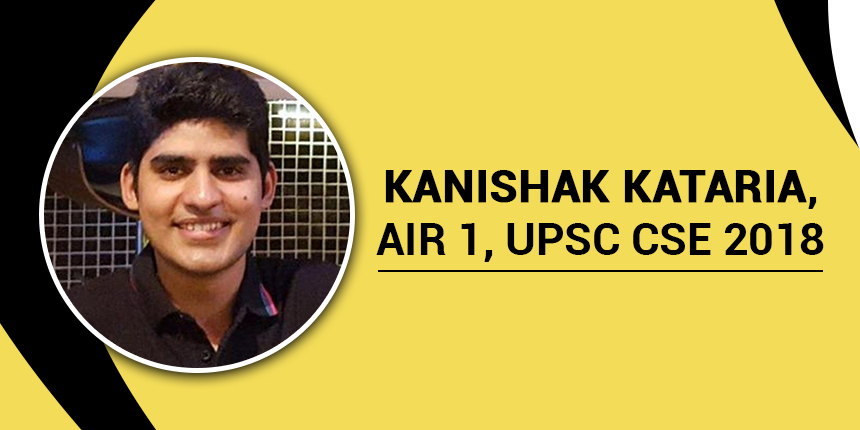 Careers360: In which attempt you cleared the UPSC Civil Services exam?

Kanishka Kataria: I qualified the exam in my second attempt and made my name for the UPSC IAS job. Previously I appeared in 2014 in this exam and the reason I appeared is that my father had filled the form and I was not prepared to appear in it but this year I gave my best efforts and the result is in front of you.

Careers360: How many marks have you achieved in the UPSC exam?

Kanishka Kataria: I gained good marks in Mathematics optional subject and even my interview marks were also satisfactory. The marks are as follows:

Kanishka Kataria: I got 44 All India Rank (AIR) in the IIT Jee Exam, while I also secured 24th position in the AIEEE Exam in 2010. I also have a CBSE Merit Certificate of securing 100% Marks in Maths in my High School and Intermediate Exam. Along with this I All secured the first rank in the National Science Olympiad in 2009.

Careers360: What is working experience?

Kanishka Kataria: Though I am UPSC topper but earlier I worked in Samsung Electronics for around a year in South Korea and after that worked as a Data scientist in QPLUM company in Silicon Valley. But I was not satisfied with my career as I wanted to be a part of India’s growth story.

Careers360: Do you think Coaching is necessary to qualify the UPSC IAS exam?

Kanishka Kataria: Coaching does not provide you guarantee that you can qualify for the exam. It is just a facilitating agent if you use it properly. Coaching can be best utilized if you have read NCERT before joining coaching.

Careers360: What are important suggestions of how to prepare for UPSC IAS by UPSC IAS topper Kanishka Kataria?

Question: How many hours did Kanishka Kataria study?

The UPSC Topper Kanishka Kataria normally studied for 6-7 hours a day to qualify for the UPSC Civil exam.

Question: How to qualify the UPSC preliminary exam?

Applicants can qualify the prelims exam by solving paper and they should also know UPSC IAS Cut off.

Question: How does the UPSC IAS topper prepare notes?

Toppers prepare notes by reading one or two books, making notes is important as you can revise the syllabus in very less time.

Question: What is the age limit for the IAS exam?

General category candidates have 6 attempts and their age is 21 to 32 years while others are given relaxation in it.

Question: Which degree is best for IAS as per Kanishka Kataria?

Though I am from an engineering background, art side candidates are more privileged as their syllabus is similar.

You should read the NCERT books from cclass 6th to 12th. It will give great benefit to you.As the other books are just a high level version of these NCERT books,you can understand the details and your basics will be superb!!

After reading NCERT's you will be able to understand the importance and need of what to study and what not.

If I read only ncert books without other books like laxminath etc. then can I qualify exam for IAS

Economic Survey by Ministry of Finance

A Brief History of Modern India by Rajiv Ahir

If I read only state board (Punjab) books for preparation of IAS instead of NCERT books then is it right path or not ?

So , you should go for NCERT books, also NCERT books are good for basic concepts and they are written in a very simple language,  also many questions in UPSC are asked based on ncert , so you should go through NCERT

how to prepare for ias exam in with a time span of 4 years? where to start and where to end? how should my time table be?

If you have four years for the preparation of UPSC examination then you can prepare in a very well manner, in the first three years cover and complete the entire syllabus and keep the last one year for revision, test series and for current affairs

Follow the below tips to prepare well for your UPSC examination :-

To start the preparation  first of all go well through the syllabus  , you can check the complete syllabus at
https://competition.careers360.com/articles/upsc-ias-syllabus

*Make a routine or a time table and try to give at least 8 hours to studies , keep short brakes of 20 to 30 minutes after every 2.5 to 3 hours

*Read newspaper daily and keep yourself updated with the current affairs

*Choose your optional subject wisely , choose the subject you have interest in.

*Revise :- there's no point of preparing for the exam if you couldn't recall anything in the UPSC Examination so you should stress on revision as well.

*Solve previous year question papers and mock test papers ;- You should solve these , it will give you idea of types of questions asked and their difficulty level and will help you a lot.

For more tips go through

how to prepare for ias agri paper

Make a proper schedule for yourself. Plan and set your targets for that particular day and complete that target honestly. If you keep completing your target every single day, you will get closer to your journey. Keep reading NCERT books for history of India and Art and culutre. Also solve previous year papers as they help you get a bettwe view of types of questions being asked..

Refer to the site below for more detailed information..