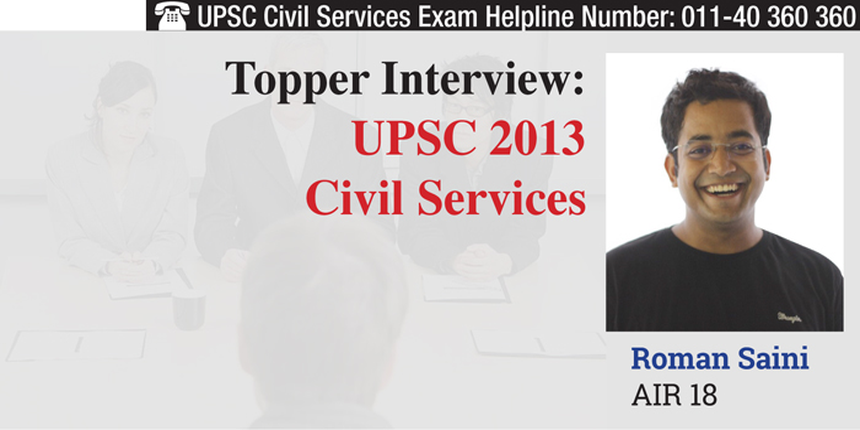 UPSC 2013 Civil Services Topper Roman Saini, who secured AIR 18 in the coveted exam in his very first attempt at the age of 22, gives credit for his success to his high-risk-taking attitude. The topper says he attempted all the questions in both Prelims and Main rounds of UPSC Civil Services Exam, and this went in his favour.

Roman, who has around 6 months of working experience as Junior Resident Psychiatry in AIIMS, says he wanted to change lives of millions and this was the key factor which kept him driving towards his goal to be a civil servant. In an interview with Carees360, Roman Saini reveals his UPSC Civil Services Preparation Strategy and shares UPSC Civil Services Exam Tips with future aspirants.

Careers360: Congratulations for your outstanding performance in Civil Services Examination! How did you celebrate your success?

Roman Saini: Thank you. I didn’t know my UPSC civil services exam result till the end of the night of June 13, the day it came out. Next morning, my friends informed me about it. There was not much of celebration as I was busy with my job as Jr. Resident in AIIMS. I was far away from my friends so I did not celebrate my success.

Careers360: What were the key factors behind your brilliant performance in Civil Services Exams? Please share separately for all three stages.

For Mains, I used to read a lot from the same sources again and again. Self-study of 6-8 hours a day is the key to success. In Main exam, I attempted all the questions from all the papers. I did not leave any question unanswered and secured 4th highest marks in India.

In interview, my performance was not very well as I got only 154 marks. About your performance in interview, there is nothing to do with lack of preparation. It is a chance kind of factor, sort of randomness and arbitrary goes along with an interview. You cannot separately prepare for it.

Other important factors behind my success are single-minded focus and not worrying about backup plans. For example, I did not think if I failed, I would be called a loser in life. Further, there is no need to worry about advisors in life. You need to just focus on study.

Careers360: Tell us something about your area of studies, academic background and job experience?

Roman Saini: My area of study is Medical Science. I completed my schooling in Jaipur in 2008. Soon after that at the age of 16, I joined AIIMS, and completed my MBBS in 2014. I have around 6 months of experience as Junior Resident Psychiatry. During my job, I realized that I could not solve grass-root problems like lack of medication, lack of diagnostic facilities and lack of awareness as a doctor. I could touch lives only on one-on-one basis, and could not touch millions of lives per se. In civil services, I will try to touch millions of lives.

Careers360: What were the key career ambitions that kept you motivated towards IAS? Where did you get inspiration for IAS?

Roman Saini:  You don’t need to dream to be a civil servant from your childhood. It is a professional commitment. However, if you decide to be an IAS officer, don’t do it for the sake of pride, money, fame, power, but for healing others.

Careers360: What was your preparation strategy for this exam?

Roman Saini: I started preparation for civil services exam two years ago, did 6-7 hours of self-study a day, and even studied 12 hours a day during exams. You should know how to read The Hindu, Yojana, how to make notes about Ancient History and how to write essays.

Careers360: What was your optional subject at mains level? How did you divide your preparation schedule among the different subjects?

Roman Saini: Medical Science was my optional subject in Mains. I used to read The Hindu editorial on daily basis, which helps immensely in essay writing. I wrote essays in simple paragraphs without using bullets, numbers, graphs and diagrams. I gave extra attention to intro, body and conclusion in essays. Knowledge of History and Political Science helped me significantly in essay writing.

Careers360: Which were the easiest and the toughest part of your journey?

Roman Saini:  Prelims GS was the toughest part and CSAT was the easiest part, though I never studied specifically for it. Due to changing pattern of UPSC, all this was unpredictable. The pattern was just changed, and nobody knew what was going to come. I was in doubt about essays etc. So, tough part was preparing for Essays, Ethics paper and also interview.

Careers360: Please share a few questions asked to you by the interview board?

Roman Saini: Interview board members were amazed at my young age. One of the board members surprisingly asked me- “you look so young, are you a candidate? You are the youngest candidate I ever interviewed.” The questions they asked me included as a civil servant how would you be able to cope up with political pressure, Dowry system is prevalent in your state – Rajasthan and any solutions that I could explain to them. I was asked many questions and I tackled all of them calmly.

Careers360: How important is coaching for preparations for top jobs exams like Civil Services? If an aspirant can’t afford coaching, how should he/she prepare for the exam?

Roman Saini:  Coaching is, no doubt, a help, but 80-90% efforts come from your own side and 10% from the supplement provided by a coaching. Those, who cannot afford coaching, can also do well in this exam.

Careers360: Besides studies, what do you do? Which sport do you like most and Why? Which are your favourite movies and books?

Roman Saini: My hobbies are playing table tennis and guitar. Table tennis requires focus, concentration and less energy, so I like it. I watch mostly Hollywood movies. My favorite movies are The Shawshank Redemption, Something the Lord Made, The Green Mile, The Pianist, Back to the Future, The Prestige and Guardians ofthe Galaxy. My favorite books are Stephen Covey's The 7 Habits of Highly Effective People, Benjamin Graham’s The Intelligent Investor, Tony Buzan’s Use Your Memory.

Roman Saini:  I am active a lot on social media. It is extremely useful. Even when I was preparing, I was active. You can join UPSC groups on facebook and take study material for exams from there. I do advocate time spending on facebook. I spend 3-4 hours a day on internet. I would advise aspirants to spend time on facebook, join relevant groups and download study material available there. By using social media, you get access of the latest study material and news, and get to know changing pattern. But it might be wasting a lot of time if you don’t know what you are doing.

Roman Saini: I would suggest aspirants to not join civil services for money, power, fame, prestige, and under pressure of parents or for getting a nice spouse. What it means to be here is to be servant for rest of your life. You have to serve people in different capacities. That should be in your mind when you decide to join this field.

Careers360: What are the top three agenda that you believe, should guide a bureaucrat?

Roman Saini: My top three agenda would be impartiality, sense of justice & fairness and development of weaker section. I will work towards providing opportunities to weaker section, covering all the relevant areas including, basic necessities and amenities, heath, education, water sanitation, etc. A civil servant can provide a level playing field to the society.

Careers360: How big is corruption a problem? What is your model for solving this evil from our system?

Roman Saini: Corruption is a very big problem in the country. Transparency index and all other such indexes are below average. You cannot rely on them. Nobody forces you to be a corrupt and no one can stop you to do so. Not to be corrupt is an inner feeling and it comes from your inside. I don’t have to be a corrupt officer and this is my inner feeling.

Stay tuned to competitioncareers360.com for more news and articles on Civil Services Exams