For me education is the most important aspect. If the education of a district is in the right direction, the district will automatically grow. Providing better education is my first and foremost objective as an SDM says, UPPSC PCS Topper Yugantar Tripathi, AIR - 2. The young engineer from Prayagraj who already had a stint with the government job but was determined to work in the field of administrative services, consistently worked hard to achieve his goal and he accomplished his target by sailing through the UP PSC exam. Talking about the preparation strategy, UPPSC PCS Topper Yugantar Tripathi is of the view that online education is yet to pick up pace and he was comfortable studying offline. Read the full interview of UPPSC PCS Topper Yugantar Tripathi as he talks about different aspects of his preparation strategy and how he cracked the exam. 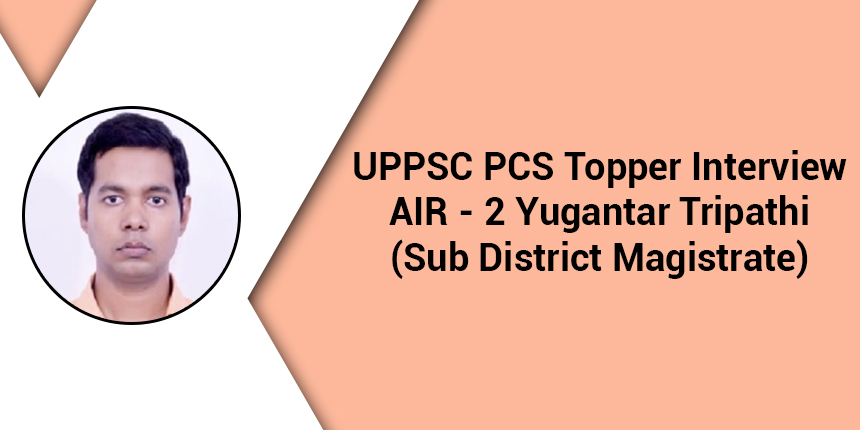 Careers360: Tell us something about yourself; your academic and family background?

Yugantar Tripathi: Talking about the family, I have my parents and two brothers. My father is a retired railway employee and mother is a housewife. My elder brother, Anshuman is a Software Engineer while the other one is a scientist at Bhabha Atomic Research Centre. I passed my class 10th in 2004, 12th in 2006 and in 2011 I completed my B.Tech in Electrical Engineering. On completion of my B.Tech I prepared for GATE and various other Engineering exams and got selected as an Engineer in Rajasthan State Electricity Board. I resigned after a while and from 2017 started my preparation for the UPSC exam. I appeared for UPSC Prelims, Mains and even qualified it, but could not qualify the interview.

Careers360: UPSC or UPPSC PCS? Which one will you choose if given a chance?

Yugantar Tripathi: UPSC is my focus, and once I qualify it I will go with UPSC, no doubt.

Careers360: What is your rank overall and category rank and how many marks did you score in the mains exam and the interview. (Breakup in each subject)

Yugantar Tripathi: Overall rank in UP PSC is AIR 2. The marks breakup and cut off will be released by UPPSC later.

Careers360: Who and what inspired you to take up the UPPSC PCS exam? Please elaborate.

Yugantar Tripathi: Right from the start I was interested in administrative jobs. My brothers used to motivate me as they were all working in good organisations. They told me that if you have the time and resources by your side, you must go for the Civil services exam.

Careers360: What were your options for the prelims and mains exam and how did you prepare for them?

Yugantar Tripathi: History was my optional for the UP PSC 2019 exam.

Careers360: What are the best books and study material that one should consult while preparing for the GS and the optional that you have taken?

Yugantar Tripathi: All those who are preparing for the UP PSC and other such competitive examinations, they should consult the following books.

For UPPSC PCS Optional I referred to -

Careers360: Have you taken any coaching? If yes- From where? How did it help? Do you think one can manage to crack the exam with self-study?

Yugantar Tripathi: I did self study and did not take any coaching for UP PSC 2019 exam. I believe that with the right kind of strategy and focus one can crack the exam by self-study.

Careers360: When did you start your preparation? How did you prepare for the exam since the syllabus is vast? How many hours did you put in per day?

Yugantar Tripathi: From mid-2017 I fully devoted myself for the Civil Services preparation. As part of my study plan, I used to study for 9-10 hours daily. I focused equally on mains and prelims exam.

Careers360: What were your strong and weak subjects and how did you manage to divide time and prepare?

Yugantar Tripathi: My weak section was Economics as it is based on current happenings. I use to study the current aspects more, so that I could answer the questions without any difficulty. My stronger area was History and General Studies.

Careers360: Were you already working somewhere or just finished college and started the preparations?

Yugantar Tripathi: I worked as an engineer in Rajasthan State Electricity Board, I resigned to focus completely on civil services.

Careers360: Which are the must read topics for anyone?

Yugantar Tripathi: From an optional point of view, say for History there are less toppers as it is very lengthy. So students must not read everything and only read exam oriented stuff like the situation of women in society, labour situation and agriculture. Focus on generic questions. For GS section, there are more generic questions like "Paschatya Shiksha ka Bharat pe kya asar pada?" Questions on Women, SC/ST, Dalit, Navjagran, Nationalism etc. Focus on these sections more.

Careers360: What should be one's approach while giving the UPPSC PCS ?– which section to attempt first and which next?

Yugantar Tripathi: There are two things in the UPPSC PCS 2019 question paper, one if a candidate has studied well they can answer any question. Answer the questions in sequence from 1 to 20.Secondly, if you think that you have not studied a particular section well, then first answer those questions about which you are confident.

Careers360: What was the toughest aspect of your UPPSC PCS preparation?

Yugantar Tripathi: Economics was a bit tricky for me.

Careers360: Name some important topics that you feel are a must-read for any student attempting the UPPSC PCS exam?

Yugantar Tripathi: Static, General Awareness and fact based topics are a must read.

Yugantar Tripathi: See, test series has its own benefits. Mock interviews are important for UPSC exams, but I didn't give mock interviews for UPPSC. I will say that focusing on test series can help you assess the level of your preparation and you can focus on a vast variety of questions and topics. Always study the solutions as well as they are very informative.

Careers360: What did you do for leisure? Any specific activities that helped you unwind?

Yugantar Tripathi: I used to live in the student area in Delhi, so I used to talk with friends, go to the library and study. We used to go on walks with friends, have tea together, return to the room, feel tired and listen to some songs, that's it.

Careers360: How did you cope up with the lockdown period? Did it hamper or boosted your preparations?

Careers360: Online or offline, which is the best way to study for the UPPSC PCS exam?

Yugantar Tripathi: Offline study is the best, as when you have the books and study material in print and physical format you can actually study well and be more focussed. Our education from childhood has been in offline mode. We are by default made for the offline version. Digital version is new and will take time to become integral part of our life

Careers360: What are your future plans and how will you try to bring a change to your place of work (area posted) as you will be very much involved in policy making and disciplinary activities?

Yugantar Tripathi: See, it all depends after getting posted. I cannot say anything right now. But as SDM is a post of power, my focus and approach will be on the betterment of primary education, providing quality education, attendance of teachers. If the education of a district is in the right direction, the district will automatically grow. For me education is the most important aspect. Better education is my first and foremost objectivity. Second, my focus will be poor people, senior citizens, as these are the vulnerable sections of the society and pension problems, irregular ration distribution are non-tolerable and my focus will be to tighten these screws.

Careers360: Which will be your preferable place of posting?

Yugantar Tripathi: See in UPPSC your jurisdiction is the whole Uttar Pradesh as you can be posted anywhere within the state, unlike UPSC where you are allotted cadre. My favourable post will be my home district, Allahabad, but as my hometown is not allotted, I will prefer neighbouring districts like Kaushambi, Pratapgarh, Bhadohi, Banaras, Lucknow or Western Uttar Pradesh.

Careers360: Were there any situation based questions in the interview?

Yugantar Tripathi: There were fact based interviews, as my interview was last and the panel were exhausted so for me the questions from the panel was fact based, UPPSC PCS syllabus based more than situation based.

Careers360: What is the message that you have for future aspirants?

Yugantar Tripathi: Dedication and Continuity. Don’t lose hope, if you have a target, focus on it completely.

18 Feb 2021
Read More
View All News and Articles
Have a question related to Main Exam ? Ask

Trending Articles around UP PCS

Your UP PCS brochure has been successfully mailed to your registered email id .