SSC CHSL Syllabus 2020 - Staff Selection Commission (SSC) will release the Combined Higher Secondary Level Examination (CHSL) notification along with an indicative SSC CHSL 2020 syllabus tentatively in the first week of December 2020. To ace the exam, candidates must accustom themselves with the syllabus of SSC CHSL 2020. Aspirants preparing for the exam can go through the subject wise important concepts and topics through the SSC CHSL syllabus 2020. Candidates can plan their studies and focus on topics accordingly with the help of SSC CHSL 2020 syllabus. Aspirants can also check previous year question papers along with syllabus of SSC CHSL 2020 to get an idea about the difficulty level of exam and nature of questions asked. To crack SSC CHSL, aspirants should follow the syllabus and exam pattern of each tier. SSC CHSL 2020 is conducted to recruit candidates to the post of Lower Divisional Clerk/ Junior Secretariat Assistant, Postal Assistant/Sorting Assistant and Data Entry Operators for various Ministries/ Departments/ Offices of the Government of India. SSC CHSL 2020 is a three stage exam consisting of tier 1, 2 and 3. According to the syllabus of SSC CHSL 2020, computer based test of tier I will comprise of English Language, General Intelligence, Quantitative Aptitude and General Awareness. Tier II is a descriptive paper held in pen and paper mode and tier III will be a skill/ typing test. 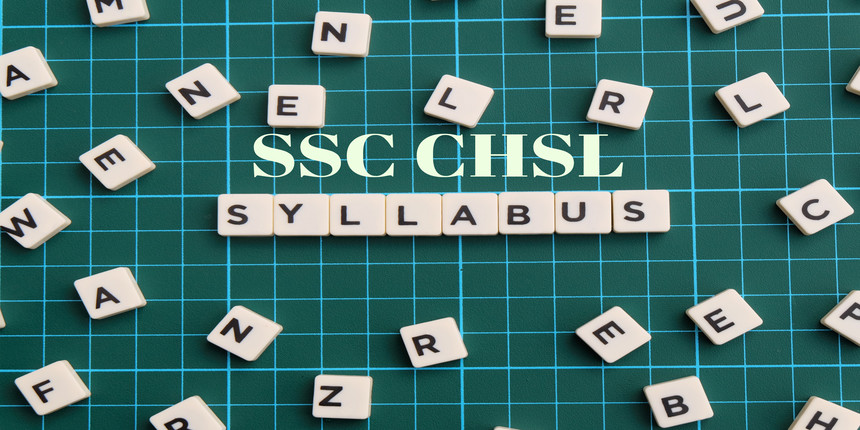 The recruitment process, as per the SSC CHSL exam pattern 2020 is three phased; tier I, tier II and tier III. Tier I is conducted online for 200 marks. The questions are set in English and Hindi except for the test in English. There will be negative marks for wrong answers in the tests of SSC CHSL 2020. 1/4th mark assigned for a question will be deducted for each wrong answer in tier I. Candidates are required to score a minimum percentage mark on aggregate to be considered tier I qualified. Tier II of SSC CHSL is a descriptive test held in pen and paper mode for 100 marks. Tier III is a qualifying test comprising a skill test or typing test as per posts one applies.

Aspirants must know the topics covered under each section of the subjects for SSC CHSL 2020 prelims. With the help of SSC CHSL syllabus 2020, candidates are able to plan their studies and focus on topics. Along with the syllabus, a list of important books for SSC CGL preparation has also been provided here so that candidates can actually start their preparation for SSC CHSL 2020. Candidates need to score sufficiently high marks in SSC CHSL tier 1 to qualify for tier 2. However, VH candidates of 40% and above visual disability, there will be no component of Maps/ Graphs/ Diagrams/ Statistical Data in the General Intelligence and Quantitative Aptitude sections.

Tier 2 of SSC CHSL consists of a descriptive test for 100 marks. The test for tier II is held in pen and paper mode. An essay of 200-250 words and a letter or application of 150-200 words are required to be written either in English/ Hindi. The topics of this descriptive test generally will be from current affairs of national or international importance. Aspirants are encouraged to write as many essays and letters/ applications before the exam so that writing skills are enhanced and they clear SSC CHSL in one go.

Tier 3 of SSC CHSL will be conducted for the tier II qualified candidates. Candidates need to score maximum marks in both tier 1 and tier 2 to ascertain their selection in tier 3. Tier III is a qualifying test conducted in the cities of regional offices of Staff Selection Commission. Although, the marks secured by an aspirant will not be considered in the preparation of final merit list, they are to secure sufficient marks as decided by the Commission to be qualified and get recruited through SSC CHSL exam. Tier 3 comprises either skill test or typing test as per the post one applies.

The benefits received in terms of salary, job satisfaction and various perquisites makes SSC CHSL a very competitive exam. To prepare for this exam, one needs to get accustomed with the syllabus and exam pattern. Aspirants are to follow a disciplined routine so that the progress is on track. A few important SSC CHSL preparation tips are listed:

Question: Is the syllabus prescribed for all tiers of the SSC CHSL exam?

SSC CHSL is a three-tier exam. The syllabus is mentioned for all the tiers in the official notification released by the commission.

No, SSC CHSL syllabus does not change every year. However, if any changes are made, SSC will definitely inform the necessary changes made beforehand.

Question: What is the duration of the SSC CHSL exam?

Both tier 1 and tier 2 of SSC CHSL are conducted for a duration of 1 hour each. While the skill test, i.e., tier 3 is held for 15 minutes duration.

There are 100 questions in SSC CHSL tier 1 exam.

Question: What is the weightage in SSC CHSL Tier III exam?

SSC CHSL tier 3 exam is a qualifying test. The final merit is deduced from the marks obtained from tier 1 and tier 2.

Question: Is there negative marking for wrong attempts in SSC CHSL exam?

For every wrong answer marked in SSC CHSL, 0.50 marks are cut as negative marks.

Question: What type of questions are asked in all the phases of SSC CHSL exam?

Tier I of SSC CHSL is a computer based test consisting of multiple choice questions. Tier II is a descriptive test held in pen and paper mode. A letter or an application and an essay is to be written in the descriptive test. Tier III is a qualifying skill/ typing test.