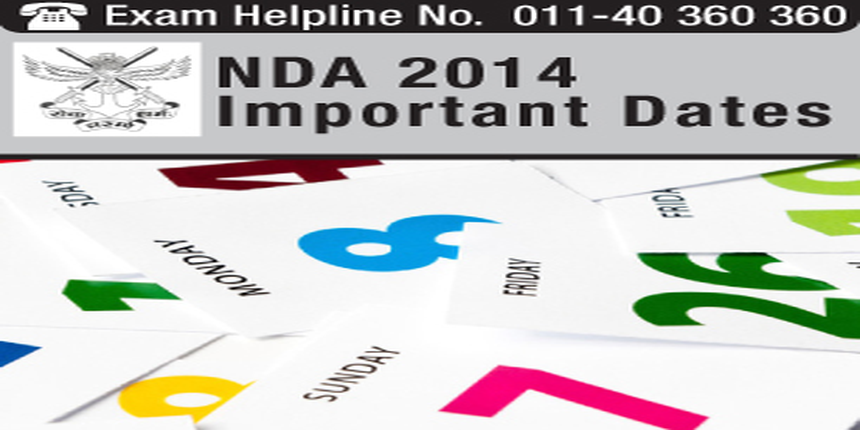 NDA II 2014 Important Dates are as below:

Along with Application Form, UPSC has also announced the Eligibility Criteria and NDA II 2014 Important Dates for the exam.

what is the physical eligibility for naval academy in nda

The physical fitness eligibility criteria include height, weight and many other factors. Candidates appearing in NDA must be physically and mentally fit according to the prescribed standards. The minimum acceptable height is 157 cm for Naval Academy. You can check the other criteria in detailed from the link given below-
http://competition.careers360.com/articles/nda-eligibility-criteria
Read More
Answer
Answer Later
Report
2 Views

which degree is offer to nda candidate (flying branch)??

NDA is a tri-services training academy, which cadets join after Class XII. At NDA , they undergo a three-year training at the end of which they are awarded a BA or BSc degree

Taking a coaching or not truly is purely dependent on your comfort level and type od studying style. The materials given help of course but there are individuals who follow the trail of concepts and practice without coaching and still secure great marks in IIT. What is your requirement? Do you think you need constant guidance? If yes, is it in the form of a coaching? These are questions that you need to ask before you decide if you want to go to coaching at all.

Looking at the whole priority situation in this case. NDA and IIT are both the toughest exams in India so you cannot focus on one with the other simultaneously. Make your goal very clear. Your first option is NDA? Go for it! Your goal is set. It's good to keep backups but you are need to understand that they let help think that we have something we can always fall upon if this doesn't work. It hampers our resolve and sometimes even weakens are goal. NDA has a huge syllabus, so you need to put individual focus on each subject but you should not do I simultaneously with IIT as it will become too confusing. In this case, coaching alongside will become too much. Somehow, if you think you are good to go for NDA and start coaching for IIT, it is completely your choice but assess the pressure you can handle and decide accordingly.Do not overburden yourself and know that too many cooks spoil the broth!

Hope this helps. All the best!

My Son DOB is 1st May 2001. He wants to apply for NDA Exams this Year. Is it possible

Your son is not under 19.5 so he cannot apply for NDA this year.you can check details here

According to official notification age limit for NDA is16.5 to 19.5. If he has born in 1st may 2001 then he is not under  age limit so he can not apply for NDA. You can check detail here