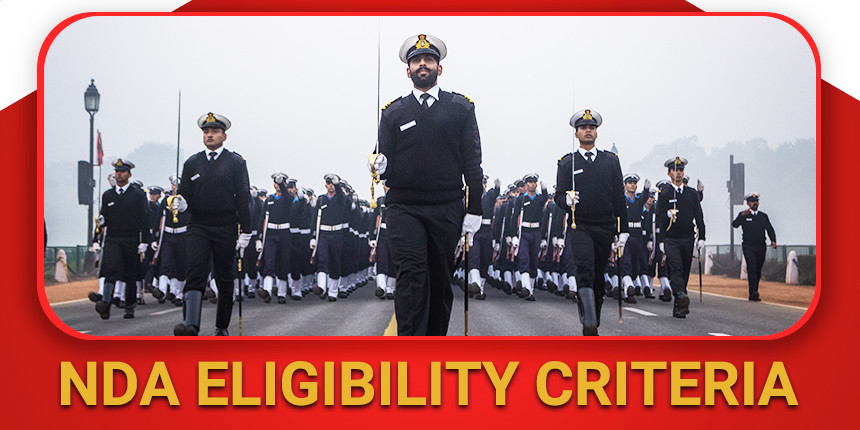 Candidates must meet the following NDA eligibility criteria 2020 to appear in the exam:

The specifications of NDA 2020 age limit are as follows

Note: There is no reservation hence there is no age relaxation for candidates belonging to any category in NDA.

Only unmarried male candidates born not earlier than July 02, 2001, and not later than July 01, 2004, are eligible to apply for NDA (1) 2020. Candidates who meet the NDA age limit criteria can only apply for the exam.

The date of birth mentioned in the Matriculation or Secondary School Leaving Certificate will be accepted by UPSC. These certificates are required to be submitted only after the results of the NDA written exams are declared.

The following candidates can apply for NDA 2020

1. A Citizen of India

2. A subject of Nepal

3. A subject of Bhutan

4. A Tibetan refugee who moved to India, before January 1, 1962, with the intention of settling here permanently

5. A Person of Indian origin who has migrated from the below-specified countries, with the intention of permanently settling in India.

Only male candidates who are unmarried and are born between July 02, 2001, to July 1, 2004, can appear for the NDA 2020 exam. Also, candidates must undertake not to marry until their NDA training period is over. If a candidate marries after applying for NDA or during the training, he will be discharged and will have to refund all the expenses incurred by the government on him.

Candidates qualifying the SSB interview will have to go through the medical round. They will have to be physically and mentally fit according to the prescribed physical standards during this round as there are a number of candidates who get rejected on medical grounds. Candidates are advised to get themselves medically examined before appearing for the exam so that they won't face disappointment during the later stages. Check NDA Eligibility criteria for SSB here

Candidates recommended by SSB will have to undergo a medical examination conducted by the Board of Service Medical Officers. Only those candidates will be admitted into NDA who are declared fit by this Board.

While appearing for SSB interview process in NDA exam aspirants ask questions i.e "Is a tattoo allowed in NDA?" or "Am I eligible to join NDA if I have a Tattoo on my body?" and other questions. Through the following pointers, we have tried to clear this concern.

According to the eligibility criteria of NDA 2020, the minimum height allowed for Navy, Army and the Naval Academy is 157 cm while for Air Force it is 162.5 cm. For Gorkhas and individuals belonging to hills of North-Eastern, the minimum acceptable heights will be 5 cm less than the above mentioned.

Candidates not eligible to apply for NDA 2020:

UPSC conducts NDA exam twice in a year. The application process for NDA (I) 2020 started from January 08 to January 28, 2020, whereas the NDA (II) the applications will start from June 10 to 30, 2020. Interested candidates must meet the above-mentioned NDA eligibility criteria 2020 before applying. According to NDA exam dates 2020, the NDA (I) exam has been postponed and is expected to be conducted on June 14, 2020. Earlier the exam was to be held on April 19, 2020, while the NDA (II) exam will be conducted on September 06, 2020. While filling out the application form candidates must enter their details, pay the NDA application fees, select the exam centres, upload photograph and signature and agree to the declaration. The NDA application fees are Rs. 100 and can be paid both in the online as well as an offline mode for general and OBC candidates while for candidates belonging to the SC, ST category are exempted from paying the application fee.

Candidates appearing for NDA 2020 exam must kick-start their preparations at least 9-10 months in advance, they should refer to coaching institutes but not rely on it completely as self-study can also do wonders. A self-made plan can benefit you in the written exam as well as the SSB Interview. Candidates can check how to prepare for NDA through the points mentioned here.

Make your concept clear - Candidates should clear their basics and should remember them on their fingertips like the clarity of formulas, addition, subtraction, percentages etc this will help them to make their NDA 2020 preparations easier.

Solve previous years NDA question papers - Make a habit to practise previous years NDA Question Papers on a regular basis. This will help you enhance your problem-solving skills and also help in getting an idea about the questions asked in the exam. It is always advisable to use a clock-timer while solving them so that you can increase your speed and accuracy.

Few more points to keep in mind while preparing for the NDA 2020 exam:

Candidates are advised that while communicating with the commission they should mention the following particulars.

1. Name and year of the examination.

4. Candidate's Name (in full and in block letters).

5. Postal Address as given in the application.

If they don't follow the above points, their request won't be attended.

Question: What is the educational qualification required to apply for NDA exam?

Dear aspirant, Yes, you are eligible provided you satisfy other eligibility criteria of NDA as mentioned above.

Question: What are the important things to keep in mind before applying for NDA exams?

Dear aspirant, after meeting the above-mentioned eligibility criteria of NDA you only have to understand the NDA exam pattern and NDA syllabus. It is always advised to solve previous year papers, practise mock test and evaluate your performance on a day-to-day basis.

Question: In which language the NDA exam is conducted?

NDA 2020 exam is conducted in both the languages English and Hindi. So you can choose either language as per your convenience.

Question: Is there an interview round for the NDA?

There is an interview round for the candidates who qualify the NDA written exam. The interview is conducted by the SSB.

Question: What is the Eligibility criteria for joining NDA?

One should have done 10+2 from CBSE or equivalent boards, while the NDA age limit criteria are 16.5 years to 19.5 at the time of joining the academy.

Question: What is the eligibility criteria for Medical Exam of NDA?

3- Tattoo marks are allowed but only in the lower part of your hand or if it is a part of your tradition/religion.

Candidates should get the following things checked/tested before the medical round:

Question: Can I change my service option in NDA even if my first preference was Air Force after getting into merit and fulfilling all eligibility criteria?

If you have qualified and have been allotted the Air Force already you can apply for a change of service. Changing to Army generally is easier as based on the number of vacancies.

You can get detailed information and process at the training centre.

Question: Does the result of 12th standard matter for NDA?

There are no minimum marks in the form of cut off as such. You just need to pass your 12th exams to be eligible to apply for NDA exam. However, during your SSB interview, you may be asked about your marks. The final merit list will be based on the marks you scored in the written test as well as SSB interview.

Question: What are the requirements to join NDA?

Question: Can I join NDA with arts?

No. If you are from arts you cannot apply.

Question: Is Girl eligibile for NDA?

No girls are not eligible for NDA.