IBPS PO 2015 Result - The Institute of Banking Personnel Selection (IBPS) has declared the IBPS PO / MT 2015 combined result for the candidates finally selected for provisional allotment. The IBPS PO 2015 Result and Score has been announced by exam authority i.e. Institute of Banking Personnel Selection. Candidates can check their selection status of provisional allotment through the official link available below on this page. 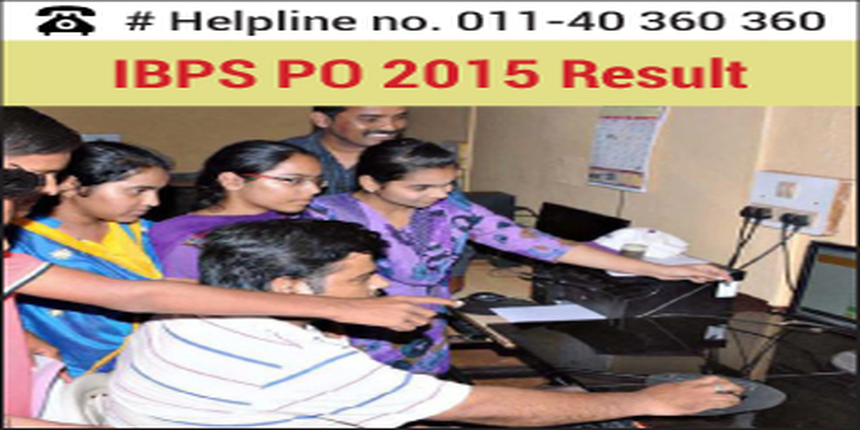 IBPS had declared the scores of candidates shortlisted for IBPS PO 2015 interview round. The candidates can check their result / score of IBPS PO through the official link provided below on this page. Earlier, the IBPS PO 2015 Result / Score for Main exam announced for the candidates, who appeared in IBPS PO Main Exam, held on October 31, 2015. The official body released Score on November 21, 2015.

The result of IBPS CWE V (PO/ MT) Preliminary exam was announced on October 16 and of Main exam on November 17, 2015. IBPS PO exam is conducted in three stages – Prelims, Mains and Interview.

Check below registration number list of candidates shortlisted for interview:

Below is the list of banks where appointments will be made through the process:

Stay tuned to competition.careers360.com for more news and articles on IBPS PO

hello sir,i am Amrita nayak frm Bhadrak , odisha,now i am bsc finallier in chemistry hons and gave 6 th semester this yrr but due to covid our last paper has postponed,but one problem is sir,i miss my 5 th semester exam due to my bad health condition ,is it possible to apply ibps po or clerk form ?

Candidates who have passed their bachelor's degree from a recognised board and candidates who are in their final year of qualifying exam are eligible to apply for IBPS PO 2020. Candidates who are in their final year must obtain their results on or before August 28, 2020. You still need to appear in one exam in 6th semester and you still have to pass in the subjects of 5th semester. Your results might not be released on or before August 28, 2020. So you are not eligible to apply for it. But if you obtain your results by August 28, 2020 you can apply if you pass your bachelor's degree

As per the official notification of IBPS for the recruitment of its probationary officers, it states :final year results of the candidates should be declared on or before 26th August,2020". So, if your final year results get declared within this stipulated time , then only you can  apply for this exam, else you have to wait for next year.
Read More
Answer

whether final year students who are going to appear for exams are allowed to appear for ibps po exam ?? as all know that due to pandemic the exams are postponed and will complete the exams in end of September.. results get declared in October.

According to the eligibility criteria the candidates with Bachelor’s degree from a recognised Universities by the Government of India or equivalent recognized by Central Govt the final year are eligible but the final result must be out on or before August 28, 2020. As we know that the final year exam will be conducted at the end of September you will not be eligible for IBPS PO 2020 exam. Candidates must also hold a graduation degree to appear for IBPS PO 2020 exam. Please click the below link to know more.

I gave my 3rd year exams before the lockdown but since many other exams didnt took place, the university has not yet released the results as of 5 Aug 20. So am i eligible to apply for ibps po which released on 4 Aug 20?

The official notification does mention that the Candidate should have a Degree in any discipline from a University recognised by the Government of India. It also mentions that the Candidate must possess valid marks sheet or Degree Certificate by the day he/she registers for the exam. The notification clearly mentions that the final results should hav been declared on or before August 26th, 2020. Because the last date for registration for IBPS 2020 is August 26th, you still have time. If by any chance the results are announced by August 26th, then you can apply for IBPS 2020 or else unfortunately you may be ineligible and might have to wait until next year to appear for the exam.

As per the official notification released by IBPS  for recruitment of its probationary officers, "it states final year results of the candidates should be declared on or before 26th August,2020". So, if your results get declared in the month of September, you don't meet this criteria and cannot apply for the same. You can apply it next year, or more better if you fulfill the eligibility criteria of RBI Grade B Officer, apply for this one, it's a highly reputed post among all the banking exams, and it's notification isn't released yet, comparatively this is quite tough exam more so because of its second stage exam.
Read More
Answer