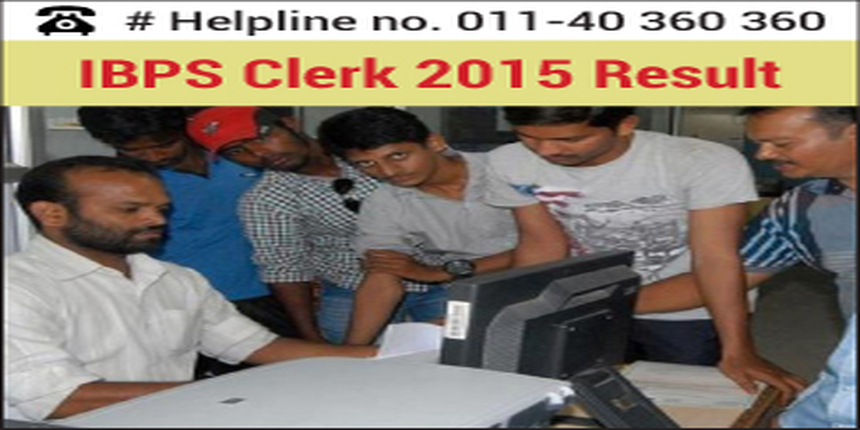 IBPS Clerk 2015 Result - Institute of Banking Personnel Selection (IBPS) has declared the IBPS Clerk 2015 result (Mains) for the candidates who have been selected for final selection. Candidates can check their IBPS Clerk result 2015 (mains) by entering the required information - registration number / roll number and password / date of birth.

Latest :IBPS Clerk Admit Card 2016 for Pre Exam Training (PET) is now available and IBPS Clerk 2016 Cut off will be available in the month of November 2016.

On the basis of IBPS Clerk 2015 result (Mains), the shortlisted candidates are called for provisional allotment. Earlier, as per a statement issued by the IBPS, the Common Written Examination (CWE) Clerical Cadre 5 result for main examination was set to be announced after the clarification from the appropriate authorities.

Careers360 publishes here the IBPS Clerk Result 2015 (Mains) after it got released by the official source. Candidates can check beow the steps to check IBPS Clerk Mains 2015 result.

Candidates had to secure minimum required marks / score in IBPS clerk 2015 mains exam in order to qualify for appointment. Only the qualified candidates are called by participating banks for selection and to be appointed in any of the participating banks.

Earlier, the IBPS Clerk 2015 result / score for online preliminary exam (CWE-V) has been announced by Institute of Banking Personnel Selection (IBPS). Based on the IBPS Clerk Result 2015 (Prelims), qualified candidates were called for the online main exam, held on January 2 and 3, 2016.

The Institute of Banking Personnel Selection (IBPS) earlier said that it will publish the IBPS Clerk Result 2015 as and when the decision is made by the concerned authorities, it said in the statement, adding that it will not entertain any telephonic inquiry from the candidates.

Process for arriving at Standard Score:

As per the IBPS Clerk notification, the standard scores of online CWE are obtained by adopting the following procedure:

Process for arriving at Total Score:

The exam authority announces IBPS Clerk 2015 Result for separately for both Prelims and Mains, basis which the candidates will qualify for the next level. IBPS conducts IBPS Clerk 2015 to fill up around 40000 vacancies of Clerical or similar posts in 23 public sector banks across India. The online exam is divided into two stages – Preliminary and Main exam.

Stay tuned to competition.careers360.com for more news and articles on IBPS Clerk

IBPS Clerk Answer Key 2019 - IBPS does not release the IBPS Clerk answer key as the test is cond...

Hello Arti,
At the time of filling your application for IBPS PO CLERK exam you are not asked to provide caste certificate.You have to enter primary details like your name, email id contact number etc and upload a scanned passport size photo and signature and a written declaration note.
But at the time of counselling you need to carry your caste certificate along with other required. SC/ST/OBC candidates must provide caste certificate issued by the competent authority in the prescribed format by Government of India.This is just enough.
I hope this is helpful to you.
Read More
Answer
Answer Later
Report
26 Views

if i scored 60 marks in ibps clerk prelims 2019, what will be the actual score i can get after normalisation

what is link of the application form for IBPS clerk exam