IAS Salary 2020 - Many candidates often want to know about the salary of IAS officers. The IAS salary 2020 can reach Rs.2,50,000 at the level of Cabinet Secretary. Under the 7th Pay Commission, revisions have been made to IAS 2020 salary. Now, the monthly salary of IAS officer has increased to Rs. 56,100/- (as basic pay) at the time of entry level. Candidates who qualify for UPSC IAS 2020 within top 75 - 100 ranks have an opportunity to become an IAS officer depending on candidates' declared preference in his/her detailed application form and interview board recommendation. IAS Officers, along with a handsome IAS salary 2020, get the prestige and status in Indian society. The exclusive perks and benefits along with the IAS 2020 salary make the remuneration of UPSC IAS 2020 officers comparable to their private-sector counterparts. Check all details pertaining to the salary of IAS officers in this article. UPSC Civil Services Examination is a single-window entry to the elite civil services of India.
Latest: IAS Admit Card 2020 to be out soon. Start Solving IAS Question Papers for better preparation 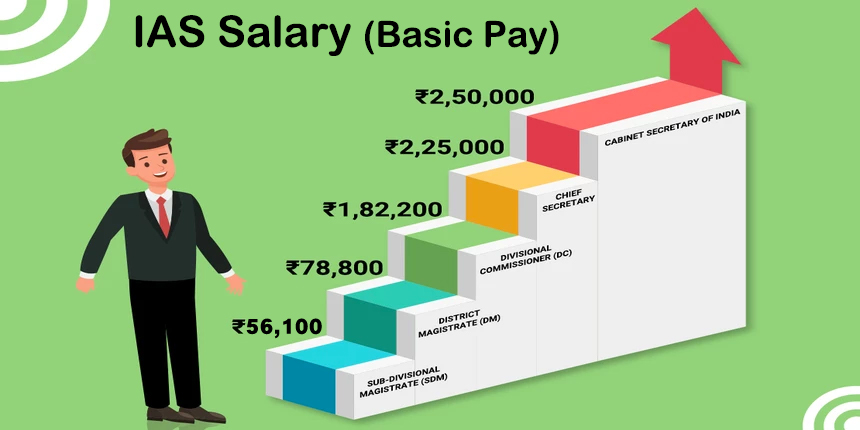 The 7th pay Commission has removed the system of Pay Grades for Civil Services and the new structure has introduced Consolidated Pay Levels. Under the 6th Pay Commission, the basic IAS 2020 salary was Rs. 21000/-. Post 7th Pay Commission, it has increased to Rs. 56100/-.

Most candidates do not realise that the IAS salary is a compilation of the basic pay plus a lot of perks and remuneration. Currently, the salary of IAS officer consists of Basic Pay along with TA, DA and HRA.

IAS 2020 salary is a sum of the following components:

How to Calculate IAS Salary?

The computation of total salary of IAS = Basic Pay + DA + HRA + TA.
The salary of IAS officers starts at the same level and then increases with their tenure and promotions. After selection, every IAS officer undergoes training at Lal Bahadur Shastri National Academy of Administration (LBSNAA). During the training period, the IAS officer is provided accommodation at LBSNAA, so HRA and the other perks like DA and TA are not paid.

IAS officers provided with government accommodation and vehicles cannot claim HRA and TA. Their total salary will be computed as,

The salary of an IAS officer at entry level will be based on emoluments recommended by 7th Pay Commision at Level 10 i.e Junior Scale. The starting salaries of IAS/IPS/IRS and all Group A Civil Servants are the same (Pay Level 10) and goes upto Pay Level 18.

The image of IAS salary matrix is given here, 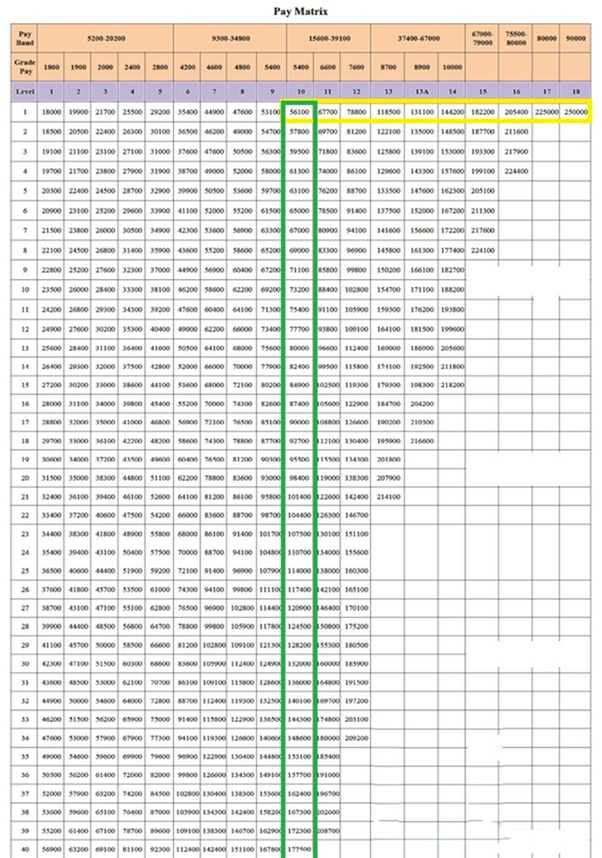 Note: Apart from these, 7th Pay Commission has done away with the Pay Band – Grade Pay System (the first two rows shown in orange colour) which existed before.

Generally speaking, IAS officers normally get a promotion every 4-5 years.

Perks and Benefits offered to an IAS officer

Despite a drastic improvement in the amount payable, the salary of IAS officer doesn’t really match up to the private sector counterparts. However, the dream of an IAS aspirant to become an IAS officer is not for the money. More than IAS salary 2020, it is the job profile of an IAS officer that draws and deserves the utmost attention. Civil servants like IAS officer are responsible for the administration and development of the country. They have a unique opportunity to positively impact millions of lives through their work. They have immense power and authority to influence government policies on social initiatives, education, health and economy of the country. The civil service is an opportunity to serve the nation and people of the country.

Previously, under 6th Central Pay Commission, the IAS Pay Scale was as follows:

Question: What is the salary of an IAS officer per month in India?

After the 7th Pay Commision, the monthly salary of IAS officer starts at Rs. 56100 for the entry-level positions. In addition to basic pay, other remuneration like HRA, DA and TA are also a part of IAS salary.

Question: What is the highest salary of IAS officer?

The Cabinet Secretary of India which is the highest post for an IAS officer has monthly basic pay Rs. 2,50,000. In addition to basic pay, other remuneration like HRA, DA and TA are also a part of IAS salary.

The starting salaries of IAS, IPS, IRS and all Group A Civil Servants are the same.

Question: Does an IAS officer get a house and a car?

An IAS officer are eligible for many perks and benefits like government accommodation, vehicle, subsidised bills for electricity, water, gas and phone connections etc.

How to Prepare for UPSC IAS Exam 2020 Online

All The Best as you have a dream to become an IAS  . I suggest you to take B.Sc as there is science stream in your class 11 and 12 . You have many opportunities as you can do M.Sc or PhD after doing B.Sc . You have an opportunity if you fail to achieve your dream of an IAS officer . If you don't get selected for IAS then you have a chance of becoming professor .

if agri is the correct graduation for IAS /

First of all,according to eligibility criteria for UPSC,candidates need to pass graduation in any discipline and attained 21 years age, you can appear even in your final year,there isn't any best course or correct course in this matter, the sole reason being UPSC doesn't discriminate among aspirants and hence allow people from all background to appear for this exam. As per previous year trends also,people from different backgrounds like engineering, medical etc too have succeeded, what eventually matters is planning and strategy in this exam.

what are the groups in intermediate which is best for ias?

I will suggest you to first choose wisely your undergraduate and start preparing from starting itself.

Then , choose your subjects according to your preparation and interest that what subject you will take as an optional subject in your exams

Many people go for subjects in ART stream like bachelor of art with subject like geography , history , political science etc according to your interest .

Also , you can try for humanities.

Hope it helps , if you have further query please feel free to ask !

i want to become an IAS.so after finishing my hsc second year which is the better course for my brightfull future?

In order to appear for UPSC, you just need to be 21 years old and passed graduation in any discipline from a recognized university,you can apply even in your final year. UPSC doesn't discriminate among aspirants and hence allow people from all background to appear for this exam.

See, it's important to understand where your interest lies, and accordingly choose career path. As UPSC is more humanities oriented, it's becomes comparatively easier for arts students to prepare for this exam as they're already well acquainted with this syllabus while science students didn't have any of these subjects at +2 level. But, let me tell you as per previous year trends, many people belonging to engineering and medical too have succeeded, and the only reason being eventually it's the planning and strategy that matters. So, think out clearly about your areas of interest, if you're absolutely clear about UPSC and have liking for any arts subject such as law, political science, history, economics etc you may go ahead, secondly if you're not sure, go with your choice it may be medical, management, engineering or anything else, even if you later feel like giving UPSC,  you can definitely go ahead after gaining some experiences in your related career field like so many successful candidates have done in the past.

I want to start my IAS preparation from home other than going to coaching centers.i want to write this exam in the year 2023 as I was born in march 2002,is it right?..which books help me for write the preliminary & mains better.i want to study in a smart way rather than spending a lot of time in it.


The eligibility criteria for appearing in UPSC civil services examination is to have a graduate degree and age above 21.First of all you should start studying newspapers daily either The Hindu or The Indian Express.
Every topper recommends that your resources should be limited because there are tonnes of materials in the market and indulging in each one of them will waste your time and you will get confused ending up in messing everything.
There are few standard books recommended by toppers,these are :
Apart from that keep and eye on everything happening around world and be curious.
For Mains,GS 1,2,3 above books and current affairs and for GS 4 you should study Lexicon.Apart from that you should study ARC Reports,NITI Ayog action agenda,PIB,PRS,Indian year book,Budget and Economic survey(of the year in which you will appear in the exam)