The NDA exam has become the most demanding career option among youngsters looking forward to being an integral part of the Indian Armed Forces. One of the main reasons behind high competitiveness in the NDA exam is the early induction process of young aspirants. The defence aspirants who have an affinity towards the Indian Armed Forces can appear for the NDA examination right after passing their 10+2 standard or even in their 12th appearing attempt. Read the full article to know the preparation tips for NDA exam that have been shared by Shishir Dixit, Founder & Director of Centurion Defence Academy. 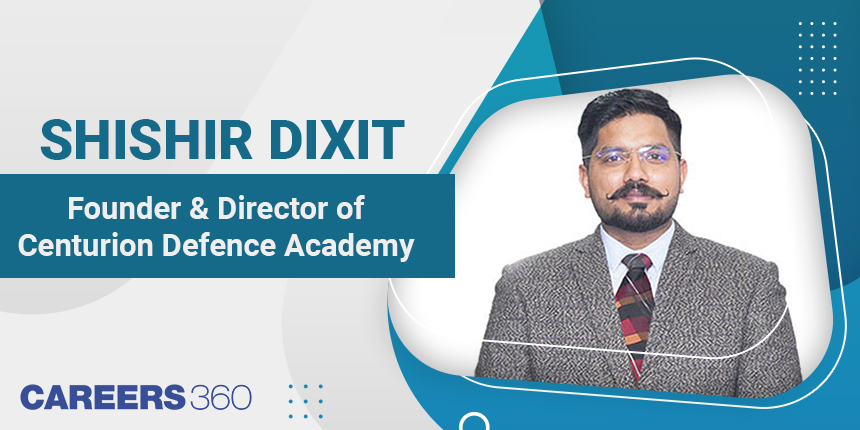 The National Defence Academy is the first defence training establishment of its kind providing academics and training facilities to the cadets of all three wings of the Indian Armed Forces. The cadets of the Army, the Air Force, and the Navy are given initial training in NDA before joining their respective service academies. The NDA exam is conducted twice a year by the Union Public Service Commission (UPSC). Candidates who meet the NDA eligibility criteria can fill the NDA application form. NDA exam mainly consists of two stages of selection, a written exam and the SSB Interview followed by the medical examination. Both these stages of the NDA selection process are of equal importance, therefore, the NDA aspirants must give an equal amount of time for preparing the written stage as well as the SSB Interview. Check the tips mentioned below on how to clear the NDA exam in the first attempt.

After qualifying for the NDA written exam, the selected candidates are called for an extensive interview conducted by the Services Selection Board, popularly known as SSB Interview.

Whether it's the written exam or the SSB Interview, candidates must be selective in choosing the right mentorship for developing a holistic approach to crack the NDA exam in the first attempt.

It might seem difficult for newcomers on how to crack nda in first attempt and join the prestigious National Defence Academy. However, it's not as difficult to clear the NDA exam in the first attempt as treated by the first-time NDA applicants, a candidate who follows consistency in learning and knows how to prepare for nda and manage time efficiently has the required potential to crack this exam in the very first attempt. Aspirants should avoid the myths that only defence-background candidates are selected in the NDA exam, National Defence Academy gives equal opportunity to every deserving candidate irrespective of his socio-economic background, caste, religion, or creed.

How to prepare for NDA SSB Interview?

I have observed that most of the first-time applicants in the NDA exam concentrate only on the written exam neglecting the importance of the SSB Interview. One must not take the SSB Interview lightly as after the written exam it is the decisive stage where the final recommendation of a candidate is ascertained after a close assessment of his personality traits. The SSB Interview is a 5-day long procedure that consists of various tests including Screening, OIR, GTO, Psychological Test, and Group Discussion, etc.

A candidate should focus on improving his personality traits in different aspects whether it's perception, coordination, team spirit or physical and mental fitness. Aspirants should engage themselves in reading newspapers to get an idea of recent happenings around the world as well as to develop their opinions with facts and reasons.

what to do after giving NDA exam ?

After the interview the qualified candidates will recieve a call letter for NDA SSB interview which a  5 days process .

In day 1 ther officer intelligence  rating test and picture perception  description  test are conducted. Day 2 of SSB interview  features  the pyschology test . Day 3 and day 4 of SSB  interview  features a range of group tasks. And finally on fifth day all candidates have to appear in the SSB interview.there the candidates will be selected If the student fails to qualify the day 1 they will be sent home.

What after NDA exam? What should we do?

After clearing the written exam, the selected candidates are called for the SSB (Services Selection Board) interview. One needs to undergo an Intelligence Test & Personality Test before he is selected for the training in NDA.

NDA examination information? What we can do after NDA?

NDA is the entrance examination to take admission in National Defense Academy (NDA) to join the forces like Army, Navy and Airforce. In this examination they ask you question from every portion from the maximum subject where Math's and english is the Top Priority.

Question paper is divided in two parts, first one is the Math's and second one is for General Ability test (GAT).

Which College I will get after giving NDA exam?

NDA examination is conducted twice a year by UPSC for admission in joint defense service training at National defense academy. The institution is situated at Khadakwasala, Pune in Maharashtra state and spreading across huge area of 7000 acres  All the best for your future.

how can i study for NDA examin

NDA  examination is the gateway to admission at National defence/ Naval academy, Pune. The first and most important thing in preparation for NDA examination is discipline and consistency.  The examination will constitute of two papers Mathematics and GAT.

The mathematics paper is very easy and consists most of the question from NCERT textbooks and past year papers. Practice questions regularly and try to solve atleast one past year paper every week. The questions though easy , can be tricky at times so build accuracy with speed as there is one third negative marking.

GAT paper consists 50 comprehension and vocabulary based questions which can be done with ease if you revise the past year questions throughout and build a habbit of adding some new words to your vocabulary each day. The Science questions are of 9th and 10th class level and requires revision of just the basic formulas. For the social science you need to cover all the topics from 9-12 ncert textbooks. There are 10-15 questions from current affairs (major last 6 months) and can be answered if you are a regular newspaper reader and make notes of important events.